Why choose cardboard, why make it «active» and how: two Italian research studies, the first from Bologna University, the second from the Centro Qualità Carta Lucense di Lucca (Lucense Paper Quality Centre), confirm how the use of cardboard can bring considerable advantages compared with other materials such as plastic, increasing safety and shelf-life of packaged products.

The problem of waste affects everything, from a global point of view, and fruit and vegetable products are important for a healthy and balanced life, due to their high content of vitamins, antioxidants and fibre: the World Health Organisation recommends having 400 grams a day because of their ability to prevent many chronic illnesses and also widespread malnutrition. However, the Efsa 2013 data clearly show that vegetables and juices are involved in 5% of food-borne infections for various reasons: from organic fertilisation, to the number of immunocompromised consumers which is ever increasing, but above all because often fruit and vegetables are not treated before being eaten to eliminate any pathogenic micro-organisms present. Fruit and vegetables, in fact, explains Professor Rosalba Lanciotti from the «Alma Mater Studiorum» Department of Sciences and Agrifood Technologies at Bologna University (Italy), contain degrading micro-organisms – like Gram-negative bacteria, Gram-positive bacteria, yeasts or moulds – which are not dangerous for the consumer’s health but play a decisive role in altering the product: in fact, conditions during transport, packaging and conservation select what species and strains will then be able to multiply or survive in the final food and which will therefore reach the consumer or will limit the product’s shelf-life. It is considered, in fact, that 30-40% of fruit and vegetables are lost during the journey from the field to the consumer, and are therefore thrown away as waste, and that in hot developing countries this percentage reaches 50%.

Even packaging is a possible source of contamination

Packaging, therefore, can be a source of contamination which can greatly spread environmentally pathogenic micro-organisms (Bacillus spp, Listeria monocytogenes, Salmonella spp and Escherichia coli) and consequently, the control of micro-organisms on surfaces is a key factor for achieving hygiene and health standards and the improvement of quality and shelf-life of foods. In unsanitised packaging, handled and stored in suitable conditions, the levels of microbial contamination can increase dramatically, augmenting the risk of transferring degrading micro-organisms, pathogens or toxin producers to the packaged products.

But is all packaging the same? Not at all. From long-term studies on fruit and vegetable packaging conducted at Bologna University, and also in collaboration with Bestack, it emerges that contamination of single-use cardboard packaging is generally less than one thousand cells per square centimetre; on the other hand, the values recorded for reusable plastic packaging can vary from 100 to one million colony-forming units per square centimetre. This wide variability depends, obviously, on the degree of sanitization and wear of the plastic packaging. Clearly those correctly sanitized and not worn have a very low level, whilst those not correctly sanitized, and already visibly dirtier, can show very high levels of degrading micro-organisms, but also indicators of faecal contamination.

Cardboard vs plastic: the advantages of «active» cardboard

Tests have been carried out to supply an active direction to the packaging market with regard to materials which offer the greatest benefits. In particular, tests carried out by contaminating packaging with indicators of faecal contamination, a non pathogenic strain of E. coli or alteration agents, have indicated a greater transference of these micro-organisms to the fruit when reusable plastic was used compared with single-use cardboard, under all the conditions chosen; figures 1 and 2 here under: the most significant results of the research carried out by Bologna University on comparing cardboard and plastic. To carry out the tests, the cardboard and plastic packaging was contaminated with E. coli, and an experimental plan was adopted in which the selling time, amount of damage (pin pricks) and storage temperature were regulated in order to assess the effect of these variables on the transfer of E. coli. Then the role of the packaging in the transfer of degrading microorganisms was assessed and the effect of the packaging on the shelf-life of the products. Applying an experimental plan similar to the preceding one, cardboard and plastic packaging was then contaminated with about 1,000 and 10,000 cells (cfu)/cm2 of Saccharomyces cerevisiae and Pseudomonas spp (previously isolated from a peach which had been left to go rotten), and peaches found on the local market were then wrapped in the contaminated packaging. Then the affect of the transfer of micro-organisms of variables such as selling time, amount of damage (pin pricks) and storage temperature and finally the fruit was analysed over time. 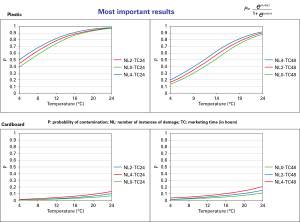 The greater shelf-life of the product and the lesser contamination are just some of the advantages that cardboard can offer as compared with plastic: first of all it is used just once, and secondly it has low «water activity» which is used by micro-organisms for multiplying (micro-organisms which are found on the surface, particularly in the presence of humidity, penetrate the cellulose fibres and remain trapped there). Advantages which translate, obviously, into an increase in the safe shelf life (figure 3). However, from long-term studies it has been verified that even cardboard packaging is not sterile, and can be a source of contamination for the packaged product: from this came the idea to make the packaging active with antimicrobial substances, in order to further increase the safety and shelf life of packaged products.

The functionality of packaging intended for fruit and vegetables therefore needs to be improved including antimicrobial substances which can be released over time, with a positive effect on shelf life and safety of products.

In search of active and intelligent cardboard

Active cardboard can therefore drastically reduce the role of packaging in contaminating the packaged product, significantly reduce multiplication of the microflora present on the fruit and the phenomenon of senescence, significantly increasing the shelf life of various types of fruit even when under extreme conditions, and increase the safety of products. But how? There has been much research worldwide, both in universities and in businesses or private laboratories. Amongst the many projects, there is a European one which is making inroads. It involves 14 partners from 10 different countries, from research centres, universities and businesses. It is called Bio-Board, and aims to produce a biodegradable film to be used coupled with a cellulose base, which has microphysical barrier properties compared with those of ordinary packaging. A material, afterwards, to reduce the environmental impact and improve the end life of the packaging itself, making it easy to separate its different layers, from the coupling created and thus enabling easier recycling. A film made of protein derived from food processing waste – in particular whey protein and potatoes.

The Bio-Board project, Giacomo Belluomini, from the Lucense Paper Quality Centre Centro Qualità Carta di Lucense, tells us, is based on previous research which showed that coating based on whey protein can supply a biodegradable barrier which can replace existing plastic coating in multi-layer packaging and therefore improve recyclability. To this end, in fact, work is being done to develop an eco sustainable coating material for paper and cardboard and more generally for cardboard-based packaging for solid and liquid food products. Bio-Board is derived from protein like that of whey and potato residue, which can be transformed using an extrusion procedure.

In effect, he explains, today 40-50 % of the 50 million tonnes of whey produced each year in Europe is thrown away as a by-product from the production of cheese, whilst about 65,000 tonnes of powdered protein and 140,000 tonnes of dried potato pulp are produced when making starch each year within the EU which could be available for new developments.

Through Bio-Board, on the other hand, a coating system will be developed from waste from the agro-food industry. A technological application which aims to develop paper and cardboard products, coated through extrusion, which increases recyclability of packaging for food and drink. 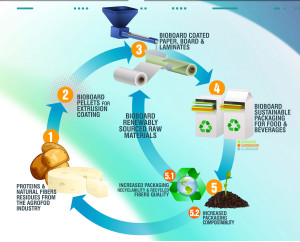