Paper and board is in global transition both geographically and by product segment. The industry is shifting from North to South and from West to East and also from graphic papers to tissue and packaging. As an example; tissue has passed newsprint in global volume already some years ago. 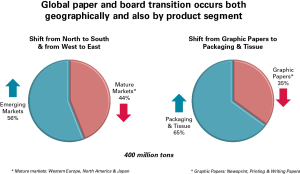 World tissue paper production has grown by about 1 million tons per year during the past 5 years, and exceeded 30 million tons already some years ago.

Number of megatrends and specific consumer market trends support the long-term growth of global tissue demand; the correlation is, however, strongest with the economic development and population growth.

GDP per capita has a strong interrelationship with tissue paper consumption per capita as far as a single region is concerned. However, differences in per capita consumption level can be significant between regions and countries, reflecting also the vast cultural and economic variations across the world.

In countries with low per capita incomes, a large proportion of consumers are still below the income threshold supporting a broad penetration of tissue products. In these emerging regions, tissue paper consumption per capita is low and in the early stage of development. Fast economic growth is expected to reflect to the overall tissue product demand.

In the western world, the interrelationship between GDP and tissue paper demand is getting gradually vaguer, as the markets are reaching maturity in terms of per capita consumption. For example in North America, the expected demand growth will be mainly driven by the population growth. 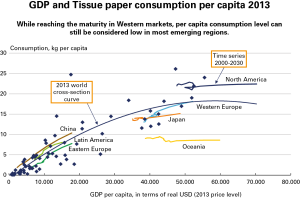 Tissue paper growth will continue to be predominantly driven by socio-economic factors such as urbanization, disposable incomes and consumer spending. In most countries, the development of middle-class consumer segment will be the key catalyst for growth – allowing improved penetration of wide range of tissue products and shift towards higher quality (multi-ply) products.

Tissue paper market has been growing fastest in Asia, China in particular. Asia represents currently some 40 % of the global tissue market.

In China, tissue paper market has grown by a dynamic 8-9%/a per annum over the last decade and China has become the second largest tissue market in the world after North America followed by Western Europe as the third.

Following the brisk market growth also the increase of capacity in China has been very fast. Tissue capacity doubled from 2008 to 2014 as tissue became a hot investment spot, however, overinvestment has resulted in overcapacity and has further caused continuous drop in the operating rates. The growth in China is expected to continue at slower rate (5%/a through 2030) due to several reasons. Especially the strengthening middle class continues to support the growth in China.

Maturing markets in the West will continue to grow but at slowing rate. Quality trends and demographics are the key drivers supporting the growth in the West.

The focus in the global tissue market, as in the paper and board market in general, is moving to the emerging markets in the East and South. 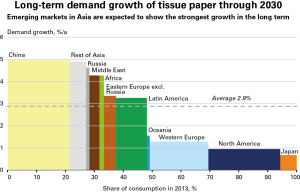 Main players: most have regional focus and more focus on tissue and hygiene

SCA and Kimberly-Clark are the leading producers of tissue paper in the world, accounting for some 10% of the global capacity, each. APP and Georgia-Pacific are fighting for the third position; APP being the very fast growing challenger is in the process of expanding its capacity in both Indonesia and China and will pass G-P with its on-going plans.

The top two firms are global players operating tissue paper mills and converting plants on several continents. However, only these two are present in Americas, Europe and Asia. Increased concentration and focus has clearly been a trend in tissue; both P & G and G-P have made an exit from Europe and a main focus can be identified for all players; SCA has strong European focus, K-C is most of all targeting North and South America and the largest Asian players are so far only present in Asia. Some opposite development shows Sofidel by expansion to North America and SCA by strengthening position in China with Vinda.

The strong focus initiates from the fact that tissue companies show higher profitability related to a dominant position in the markets and strong enough position in relation to local retailers, their clients, as well as in relation to their suppliers. A fragmented business model has not been showing very good results in tissue.

The increasing focus on the tissue and hygiene segment inside companies may also be one consequence of the paper industry transition. Tissue companies are no longer manufacturing companies where hygiene papers are part of the portfolio but focused consumer goods providers with a very different business model. SCA is a good example of this; the market valuation of the currently predominantly a hygiene company is consequently at much higher level than before. 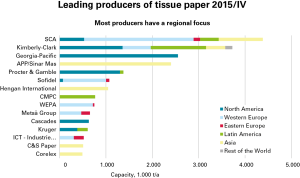 Quality requirements and other trends

Further quality upgrading is a typical trend both in the mature and emerging regions. Multi-ply or structured virgin fiber based products / premium quality products seem to be a trend that may only temporarily slow down due to an economic downturn.

Changing consumer habits support the adoption of wide range of tissue products and development of new innovative products impacts to quality development through the supply push.

Due to the deteriorating availability and quality of high quality recovered fiber a common trend in the tissue fiber furnishes is the «virginization». Recovered fiber holds its position in AfH, in certain ‘environmental’ demand and where the price and quality level is too low for virgin tissue. However, in direct competition with virgin tissue RCF is losing its competitiveness and the simple lack of RCF turns the tissue to more and more virgin based. The fiber furnish is often the main differentiating factor for quality segmentation.

The virginization can also be boosted by fiber integration of especially BHKP mills to tissue. Some years ago exiting own pulp production was a trend in tissue (K-C, P-G) recently, however, there has been an opposite development especially in Asia where APP is gaining a dominant position with a production based on fiber integration both in Indonesia and China. Similar development can be seen in some other cases and locations as well.

The virginization may boost the industry transition and tissue becomes increasingly important for the market pulp providers as well.

What is topical in Europe?

Brisk capacity additions continue especially in Eastern Europe. The most important countries are Russia and Poland that together account for close to 60% of the total Eastern European market.

Transition of the paper industry is shaping also the European tissue business. New entrants appear due to escape from graphic papers or in search of competitiveness for smaller pulp mills.

Tissue is becoming an increasingly important segment within the total pulp and paper industry – a safe haven.

The opportunity to consider tissue as a new direction for the production may be a solution for some threatened producers in the declining segments.

In addition, tissue is also increasingly important for the whole forest industry cluster; for instance for machinery and equipment suppliers and for pulp producers. Tissue end use accounts for more than half of the markets of many significant market pulp suppliers, especially in BHKP.

Maybe tissue industry can be seen as a safe haven.