In Italy, in the region of Tuscany, paper manufacture has taken on the district characteristics, linking its image to the land to which it belongs and having a considerable impact on the whole area, economically, environmentally, socially and culturally. The Cartasia project is part of this territorial framework through the language of contemporary art and events. It is an International Festival, an artistic and cultural project, with environmental objectives, aimed at uniting art and one of the main industries of Tuscany: paper.

A two-yearly event, its seventh edition was held in 2014, dedicated to the theme of Liquid Identity, expressed through art, economy and society. Various initiatives featured at the occasion: competitions, exhibitions and events.

The centre of the event was the international competition between the designs of artists from all over the world, which were subsequently selected by a panel of experts. The works chosen were displayed in the squares and roads of the city where they could be admired and there could be interaction. The artistic installation therefore, placed in the environment of the town, comes to life: the works have their own space which can be seen, felt and crossed through. Furthermore the coinciding of Cartasia’s ten-year anniversary with the five hundred years of the Lucca city walls has allowed the re-installation of some of the best sculptures from past editions, placed in the terraces of the city walls. And as a corollary to the installations en plein air, exhibitions, events and performances created a rich calendar of initiatives throughout the whole Biennial month.

Starting with the International Outdoor Exhibition, show-piece of the Biennial, this year six finalists out of 300 competing designs were chosen, and they displayed their paper monuments in Lucca’s squares. And in honour of Cartasia’s ten year anniversary, together with these sculptures, three sculptures from past editions were also displayed. Winner of this year’s edition was the Polish artist Kamila Karst, with his Kataphraktos, a horse made entirely from cardboard (see photo). Here is an overview of the artists: 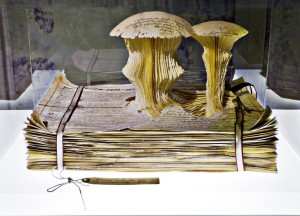 Another exhibition was created with works created by young people from the higher school art institute in Tuscany. A “School indoor exhibition” competition was also announced for this. Out of all the designs presented only 12 models were exhibited, for creative thinking, keeping to the general theme and for feasibility (approximate) of making the model on a large scale.

Finally there was the events section: great importance was given to this part of Cartasia because through the Meeting For Ideas people talked, discussed, criticised the theme which characterised the whole of the 7th edition, that is, Liquid Identity. The guests, with the relative subjects discussed, are presented in the website section.

Thanks to the Creative Workshops it was possible to involve a public often outside the exhibition/art sector, that is children. Using again the Munari method, Elena Bravi, an expert with a degree in cultural heritage and the history of art, led these children on a journey between the works presented in the exhibition to then get them to create a work similar to one of those shown on the upper floor, demonstrating that art is not so difficult to understand and create.
Finally, the last event, but no less important a one, was the Koski spectacle, in collaboration with the Bagni di Lucca Art Festival. Created by international artists. Their objective was to represent that which made the greatest impression on them of the culture of the place, after spending a period of time there. In fact each spectacle is different, one from the other.

Alongside institutions such as the Municipality, Chamber of Commerce and Province of Lucca, region of Tuscany, MATT, MIBAC, bodies such as Assindustria and the Architects’ Association of Lucca and the considerable support of the Fondazione Cassa di Risparmio of Lucca, the paper mills Ds Smith (main sponsor) and Smurfit Kappa, contributed, giving significant support to the event, adding value and emphasising the important role of art.
Furthermore, this year the Biennial was backed by various new collaborations which helped to ensure the success of the event:

But Cartasia 2014 does not end here: the indoor exhibition of Cartasia, having been greatly appreciated for the topicality of the theme it dealt with and the special works collected, will very probably be exported to San Francisco in 2015. The catalogue of this edition is in the process of being made and will be able to be purchased from the website.