«In recent years together with my brothers, with whom I am currently closely cooperating and sharing responsibilities, hurts and highs, I have mainly managed my father’s work; in particular, the 2008 exhibition on Valentina in Milan represented the start of a real personal change of course. After years of work as an architect, during that exhibition that I personally curated and followed, I felt that I had finalized a complete work: the huge 1,200 m2 house telling Valentina’s story, where I also added my passion for paper, was a very important step. Besides the satisfaction for reaching a complex goal, since then my work as an artist changed, as I started deploying my skills as a stage designer more than as a sculptor». As a matter of fact, over the last few years Caterina’s works have started «talking» and telling stories: while her paper art was more expressed in the creation of separate objects, her artworks are now being designed as part of the space surrounding them since their initial conception and the beautiful paper dresses generate stories, which are then animated into real characters.

Recurring (but not only) women

All of Caterina’s works are characterized by a female focus, yet the male presence is not excluded. «I also created a man character, in which I wanted to tell a little bit of my father: a very elegant man in paper and metal, with his white head on the front and a horse head on the back, which was created in collaboration with another artist, Claudia Gramegna, who works with metal wire. This character stems from one of my father’s anecdotes, according to which when he was a little child, whenever asked what he would like to do when he grew up, he would answer that he would have liked to be a horse».

The two real new developments of the last few years

Yet the real new development of the last few years is represented by the courses Caterina has been holding at the European Design Institute, Naba and the Creative Academy (i.e. a post-graduate course organised by the Richemont group and sponsored by leading fashion brands): «the students, who will then work in the luxury field as jewels or watches designers, come from several parts of the world (Iran, Singapore, China, Japan, France) and it is really interesting for me to have an exchange of views and ideas with different countries and situations. We also collaborated with Mont Blanc and the Van Cliff & Arpels jewels manufacturer – together with the students we have created paper prototypes with exciting results for all: I always tell the students that inspiration must stem from the world surrounding us and not from fashion magazines».

As regards young people, there is a second new development: Caterina has been working for two years with her two assistants Emanuele Bestetti and Ilaria Berardi,  who trained at Naba as stage designers and whom she met on the occasion of the course on paper costumes for the opera performance La Traviata. Talking about Caterina, Emanuele says: «Working with Caterina is always like making a discovery, she has the ability of introducing you in her reality made of paper, halfway between dreams and tangible reality. She leaves lots of room to artistic initiative and is always willing to listen to you and create with you something unique. Exactly like her sculptures reveal a burning passion, the same passion and artistic spirit also characterize my relation with her. Friendship is the most important thing she conveyed to me. Starting from this feeling you learn more than a profession, you learn how to live. To live with and within art». 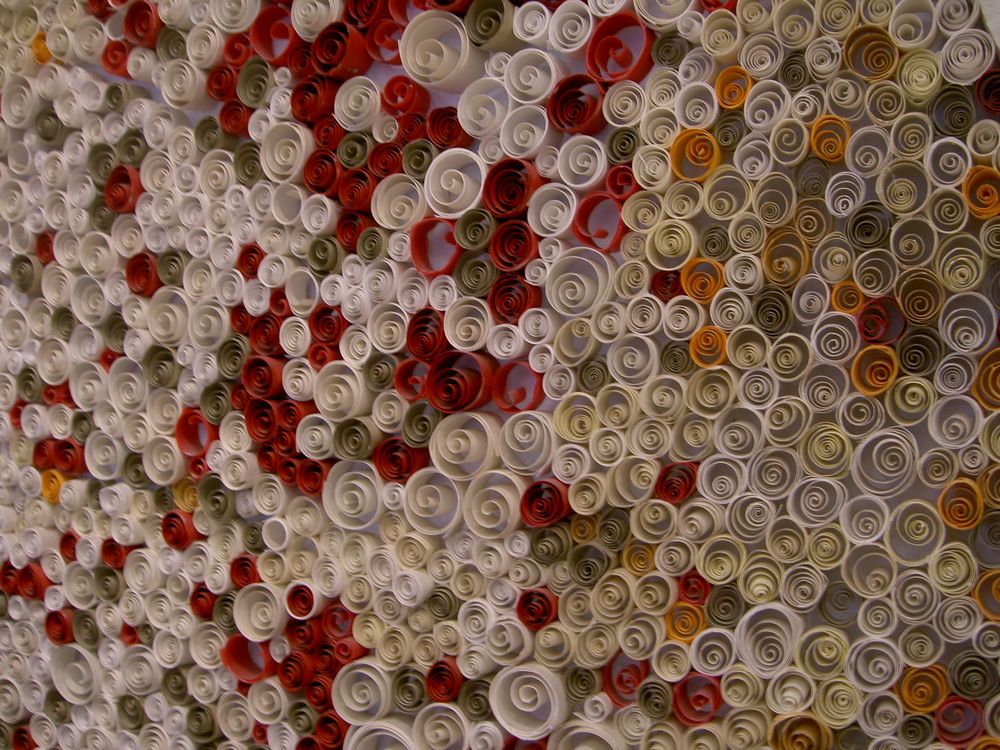 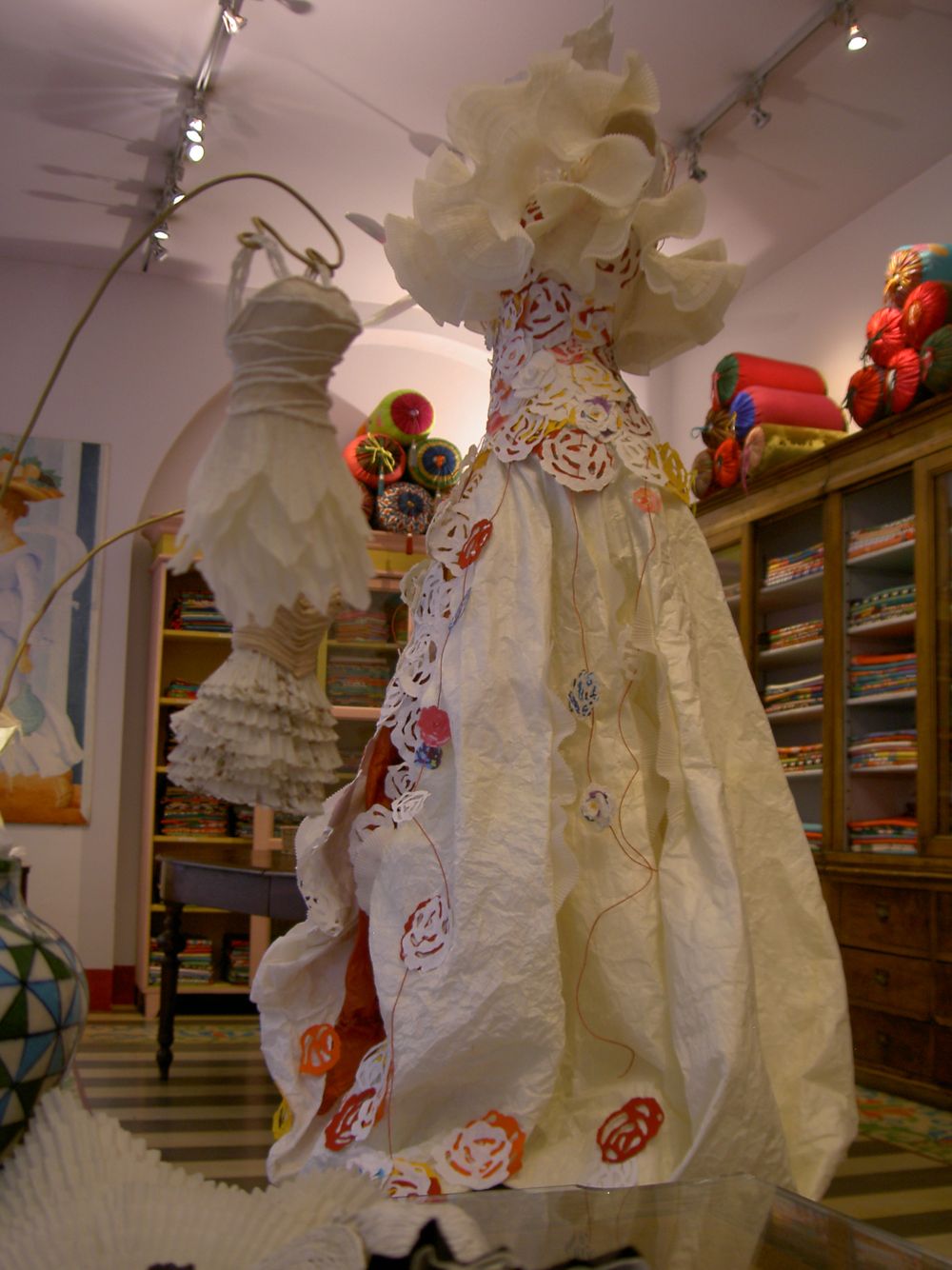 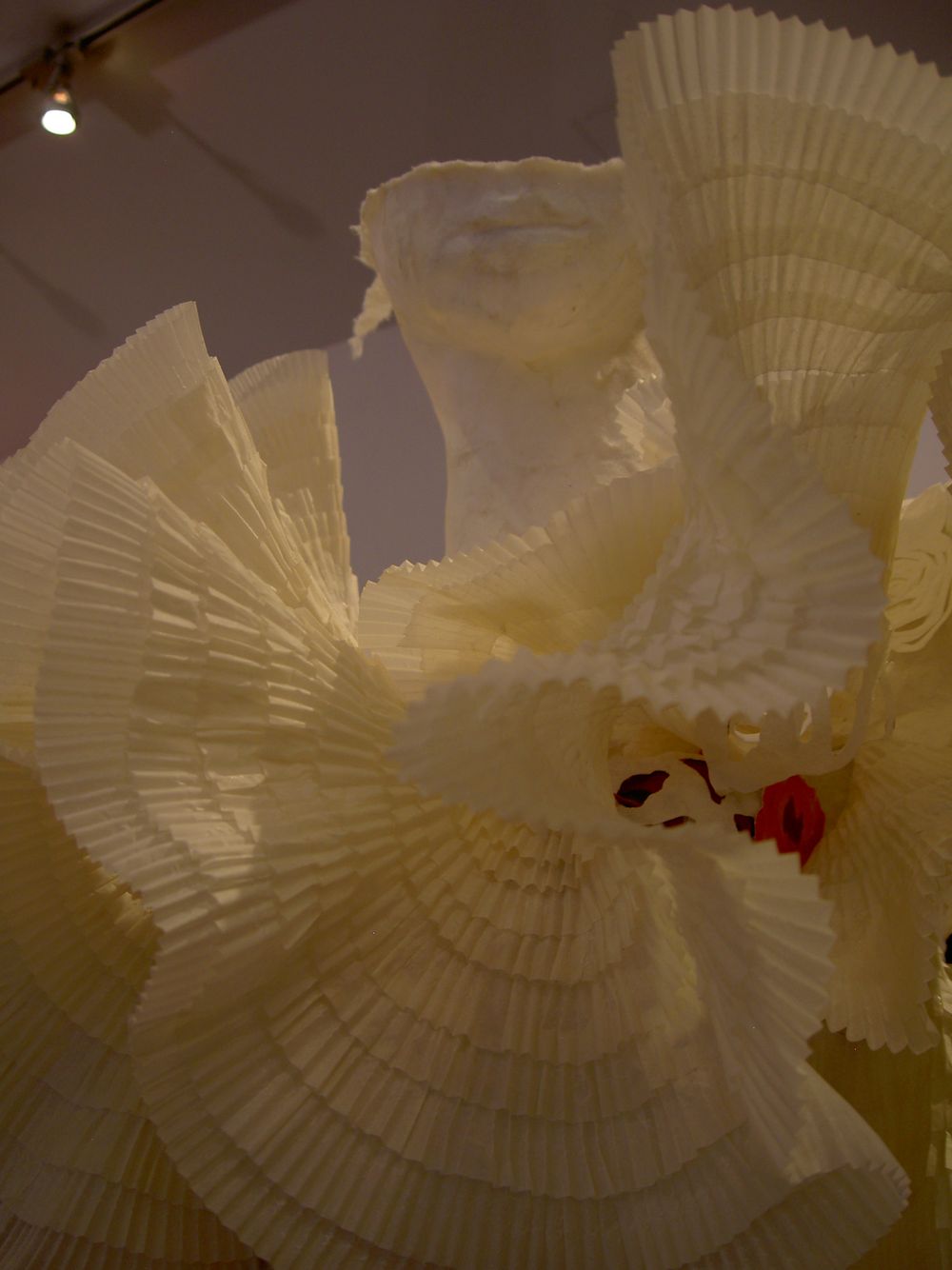 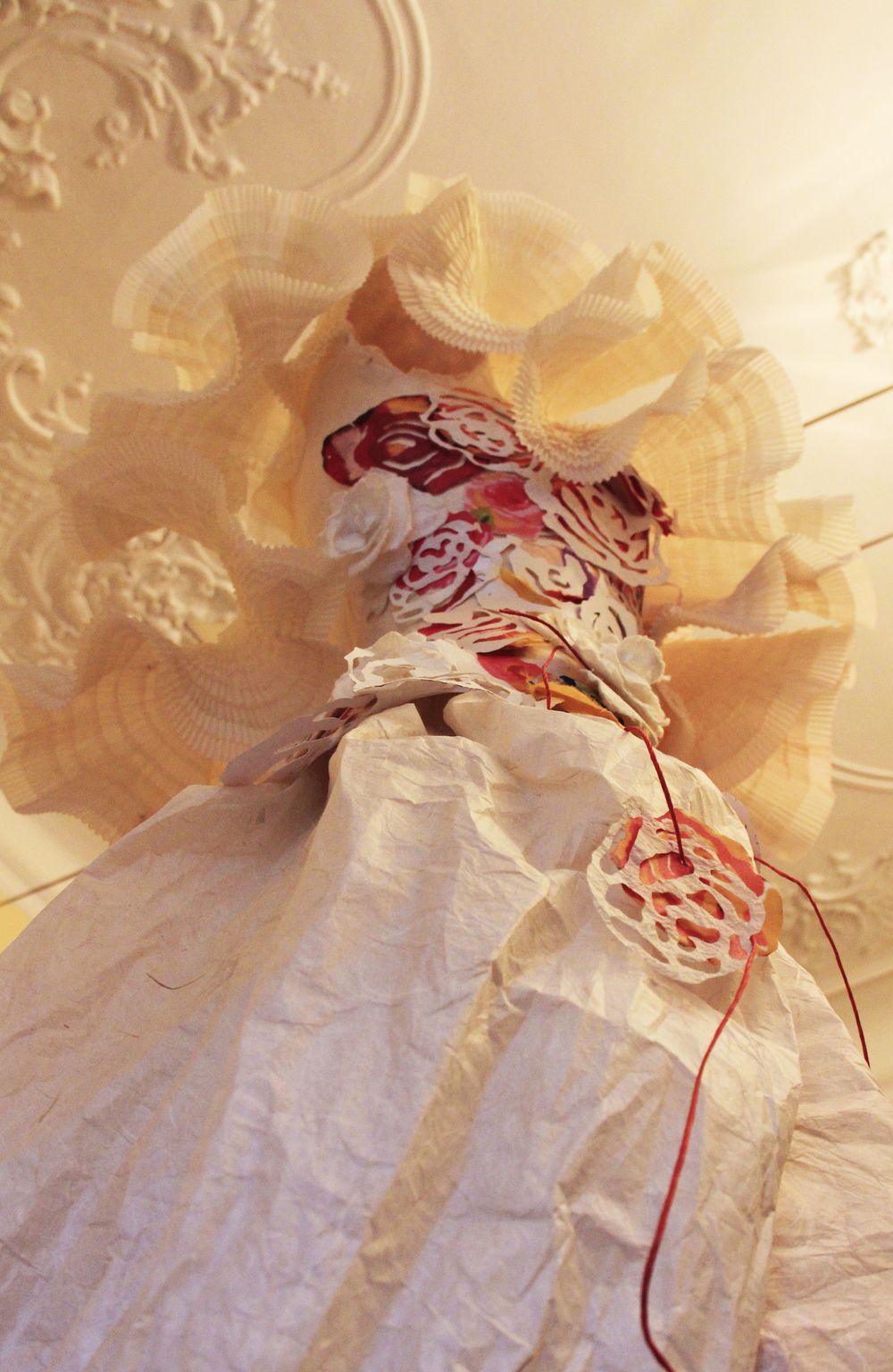 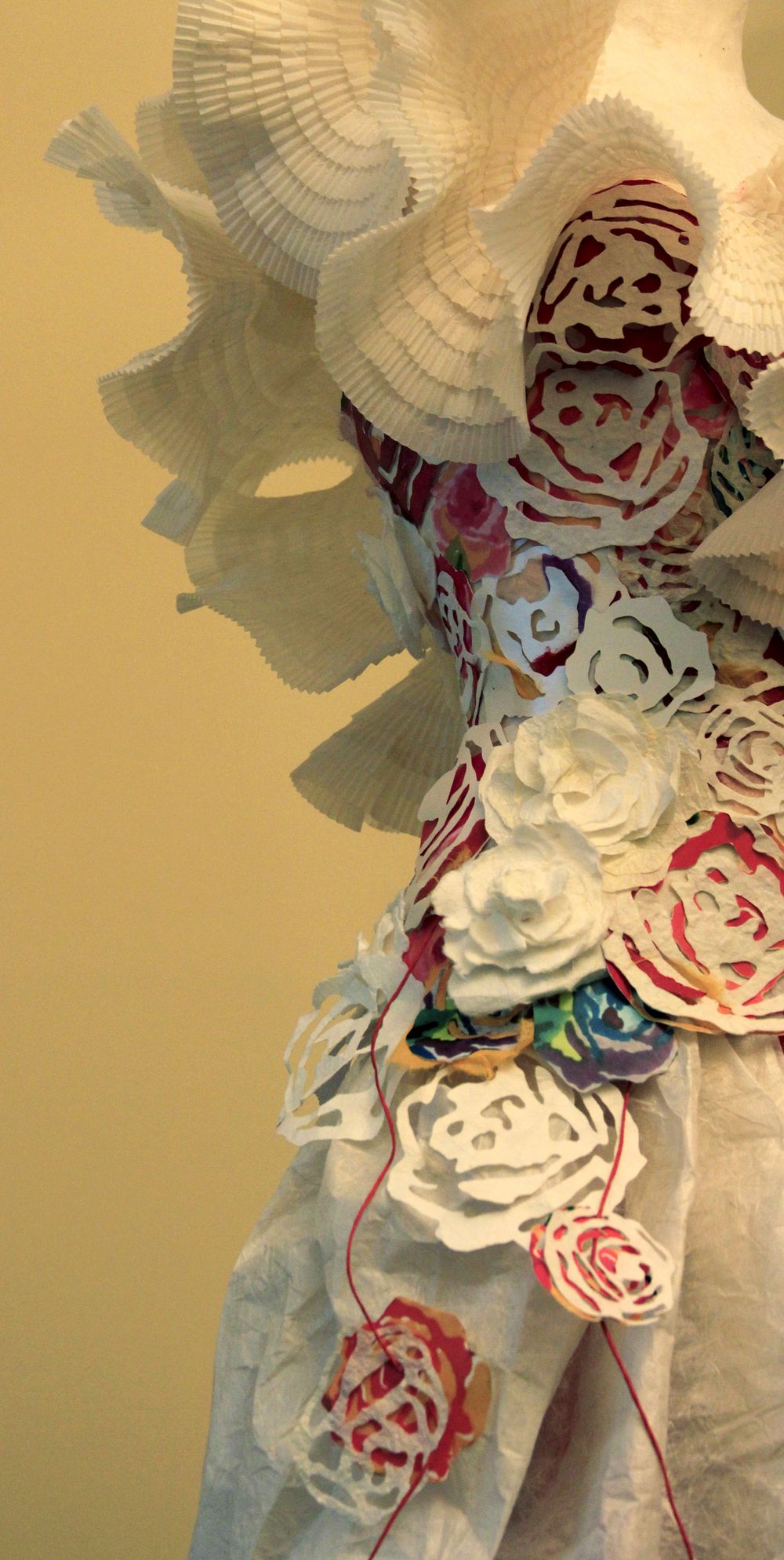 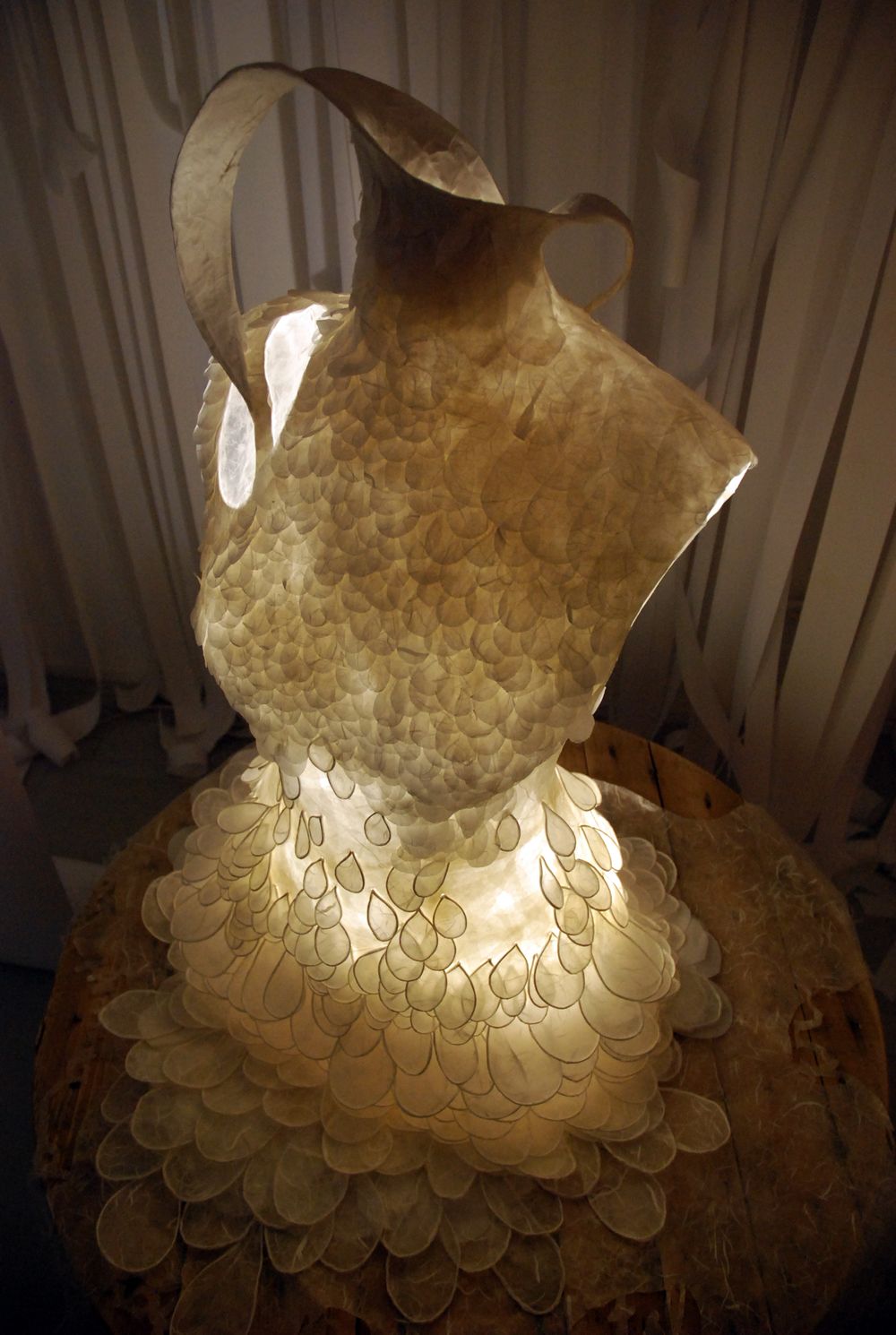