Eua Price Gained 40% in Third Quarter of the Year

The EUA Dec17 gained almost 20% or more than one euro in September (and 40.6% in the third quarter of the year!), hitting a maximum of 7.72 euro during the month, a level not seen since January 2016. The traded volume jumped by more than 80% compared to lacklustre August when auction volumes were low and market participants were on holidays. The price moved in an increasing trend channel since mid-May, and the rally accelerated in the beginning of September. In the second half of the month, the benchmark carbon contract took a break and consolidated near the 7 euro level. 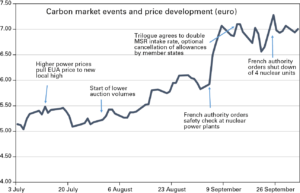 The correlation between western power prices and carbon was strong recently. Market participants reacted intensively on the announcement of the French nuclear safety authority ASN about extending safety checks at EDF’s nuclear power plants. The authority already requested the shutdown of four generation units of the Tricastin plant. The heavy reactions of power and carbon market traders can be understood in light of last year’s events, when the authority prohibited returning of nuclear power plants to the grid and speculation started that the missing nuclear capacities would have to be replaced by German (mainly fossil fuelled) ones. 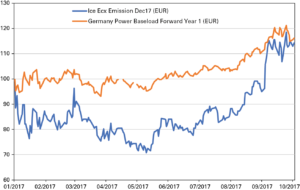 Lack of Demand for Cers

The lack of demand for CERs pushed the price to a new minimum at 18 cents recently. The price held stable near 0.20 euro in summer, but was not able to remain at this level and fell further, confirming the overall trend. EU ETS installations with a linking capacity represented the highest demand for CERs, but due to the fact that they used most of their linking capacity, their appetite vanished in Phase 3. A new market for CERs could be the offsetting scheme designed for the aviation sector, CORSIA, but as long as the list of eligible units is not decided and published, market participants won’t risk building huge long positions in CERs. 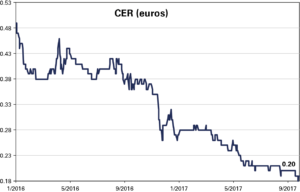 Progress in reforming the EU ETS

After the summer holiday season political negotiations restarted about the reform of the EU ETS. Representatives of the European Parliament and the Council had several meetings aiming a consensus about the different points of the post-2020 reform package. Politicians were also supported by technical experts who met several times behind closed doors before the trilogue meetings. By the end of September there was a broad agreement among legislators to increase the intake rate of the market stability reserve to 24% in the first five years of its operation from 12% originally proposed by the European Commission in 2015. In Phase 4 member states would be allowed to cancel allowances if necessary due to national policies overlapping with the EU ETS. Cancellation of allowances would be also possible on EU level from 2023 on from the market stability reserve, up to the volume above the number of allowances auctioned in the previous year. It has been also agreed that free allocation has to reflect actual production levels (dynamic allocation). The current carbon leakage list that would expire in 2019 will be extended for 2020.

Not everybody seems to be satisfied, however, with the achievements of the reform negotiations. Italy and France both proposed also a border tax adjustment levied on products from third countries without a price on carbon.

In his vision about a new European Union, the French PM Macron also suggested in September the introduction of a carbon price floor that should be effective and be therefore at least 20-30 euro. The German state secretary for environment Jochen Flaschbart, however, told journalists that a carbon floor price is off the negotiation table on EU level right now.

The most awaited event of October is the trilogue meeting 12 October. As the last draft of the EU Presidency put it, it is expected to be the «final trilogue», if participants can achieve an agreement on the still outstanding topics.

Negotiators still have to agree about limiting the validity of allowances, the auction share flexibility in the case should the cross sectoral correction factor apply, the different funds and indirect cost compensation of energy intensive industries.

Beside the reform negotiations, the other political risk affecting the EU ETS is Brexit and the UK installations leaving the EU ETS. In this regard, both sides of the Channel took steps to avoid the negative effects of a hard Brexit. First, the plenary of the European Parliament passed an amendment proposing limitations to the eligibility of allowances issued by the UK after 1 January 2018. If there was a hard Brexit in March 2019, allowances issued by the UK after 1 January 2018 would be not eligible for compliance in the EU ETS. The European Commission started drafting an amendment to the Registry Regulation to mark issuing country and issuance day of allowances from 2018 on.

In her much awaited speech in Florence, UK PM May however proposed a 2-year transition period from 2019 to 2021 when the UK would accept rulings of the European Court of Justice and contribute to the EU budget, but in exchange asks for access to the common European market. Market participants interpreted the transitional period that UK installations would remain in the EU ETS until the end of the current trading phase. The carbon market could avoid this way that British industrial installations sell their allowances accumulated during the time of the financial crisis and UK installations unwinding their futures positions.

The two countries that are seen as having the biggest influence on political negotiations are France and Germany. Since signing the Paris Climate Agreement in December 2015, France put itself to the forefront of the fight against climate change. It therefore supports any measure that would a (preferably high) price on carbon. Germany, on the other hand, might push for a fast agreement about the reform of the carbon market as it has to form a coalition government from three parties the preferences of which differ most in the field of climate policies.

All in all, if reforms are ambitious and get adopted smoothly before the next Conference of the Parties in November (COP23 in Bonn) and the carbon market can has some safety measures on place to avoid the possible negative effects of a hard Brexit, the price of allowances might continue its path towards higher levels in the last months of the year.

After studying at the University of Budapest, Bernadett Papp got her MBA from the University of Lyon. She started working at several investment firms as equity research analyst specialising on utilities and Esco companies, before joining Vertis Environmental Finance in Budapest. She is with Vertis since January 2012. Vertis has been a pioneer in the carbon market since 2001 and serves more than 800 clients.