After losing 6.1% in September, the benchmark carbon contract hit a six months low 9 October at 22.03 euro. In the second half of the month, the EUA Dec19 recovered and climbed higher to close the month with a gain of 3.6%. The traded volume only increased marginally (+1.6% m/m) from September. The open interest on ICE decreased further (-6.5% m/m) and fell below 400 million.

News from the UK put the carbon price on the roller coaster again as the deadline for the country to leave the EU was 31 October. With a new withdrawal deal draft on the table, the EU was ready to offer an extension to the above deadline until 31 January 2020. The UK used the extension to announce snap elections for December 2019.

All the above left the carbon market participants in uncertainty regarding the compliance obligation of the British installations for this year and the start of the issuance of 2019 allowances. (See the Topic of the Month on the next page.)

The decreasing probability of a no-deal Brexit lifted the carbon price visibly in the second half of the last month. The price broke from the declining trend channel it moved in since the day of the election of Boris Johnson as the new British Prime Minister in summer. After the break out however the price was not able to climb any further as the uncertainties remain. The benchmark carbon contract therefore consolidated near the 25 euro level end of October and beginning of November.

Even considering the Brexit uncertainty, the carbon market held relatively stable in the month of October as energy fundamentals were not supportive for the price of emission allowances.

Almost all parameters worked in favour of gas. The benchmark German power contract lost 2.0% in a month as temperatures remained near or even above the seasonal average and renewables were able to cover a big part of the power demand.

European coal for 2020 delivery declined by 3.0% due to the low demand of European utilities. Inventories at the major Western European ports stood at record levels during almost the whole month.

TTF European gas prices lost even more than coal (-8.5% m/m) as market participants priced in the low demand that could not catch up with the high supply (mainly LNG, but also from Norway and Russia) and the arriving to Europe. 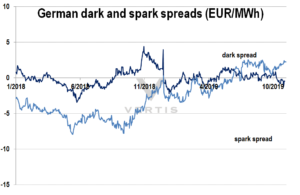 It should be therefore no surprise that according to preliminary statistics, Germany’s use of lignite fell 21.7% during the first nine months this year amid production cuts, power plant closures and displacement by other energy sources. Lignite recorded the largest drop in percentage terms among energy sources in Germany, followed by an 18.4% fall for hard coal consumption.

The relative stability of the carbon price despite the unfavourable fundamentals might be partially explained by the publication of new details about the Phase 4 free allocation to industrial installations. The European Commission announced on the last day of October the adoption of the regulation on adjustments to free allocation of emission allowances due to activity level changes starting from 2021.  When the level of operation of an installation increases or decreases by more than 15%, the level of free allocations will be adjusted. As a consequence, the free allocation will be more flexible than in Phase 3.

In 19 auctions 56.5 million allowances will be offered in November, 4% less than in October. In addition, the EU will offer 884,500 aviation allowances on 6 November.

In the UK, November will be most likely about election campaigns and we do not expect and major decision or information about the compliance obligation of UK installations in the EU ETS.

Meteorologists mainly expect temperatures in line or even above the seasonal average in November. This might result in lower demand from utilities for emission allowances. Low gas prices might add pressure on the carbon price as well. Renewable production on the other hand is not forecast to hit new records resulting in European utilities still relying on fossil fuels.

As the heatmap below shows, the carbon price increased in three out of the last six years as companies cover most of their emissions with the end of the calendar year approaching. If the price does not fall significantly below 25 euro in November, buyers might feel the urgency to buy allowances before they climb higher.