The EnerOp – or Energy Optimised brand – has been developing steam and condensate systems for Yankee dryers and paper machines worldwide for about 25 years. It refers to a joint venture established between the US-based Fenix Earth Inc. and Combustion Energy Systems Ltd. (CES), headquartered in Canada. The two companis aim to provide businesses, paper industry players included, with a complete range of energy reduction technologies, thanks to the specialised solution portfolio they have been developing over the years. Namely, the first one takes part in the project by offering its Fenix hydrodynamics steam traps, whereas the latter builds upon the capabilities of its ConDex condensing heat recovery units.

As a traditional partner of such firms as Kimberly Clarke, SCA, Procter and Gamble and a variety of machine builders, EnerOp can today display a strong expertise in the tissue and paper machine drying sections. This know-how also allows it to design steam and condensate systems, virtually suitable for manufacturing plants or production lines of any kind.

Understanding the usage of energy

Rob William, from EnerOp, at Tissue World in Milan, pointed out that to understand the actual usage of energy is the starting point to implement an in-depth study about the thermal balance of a plant, taking into account the fact that each facility has peculiarities of its own.

EnerOp representative considered in first place that «the majority of tissue plants now run on natural gas» and that «two are the sole inputs of gas into a mill». The Yankee hoods are the first; the latter are instead represented by the boiler or Ccgt: a tissue manufacturing company’s primary goal, under this specific point of view, should then be that to reduce consumption at these very sources. As Williams observed, «gases typically leave the Yankee hood at a 300 °C grade temperature», and the target of reducing the temperature of exhaust gas to a 60 °C threshold or less, at the same time recovering a part of the evaporated water, can be achieved by applying four different technological solutions. One consists in installing a heat recovery steam generator (Hrsg) «to either produce low or high pressure steam». The second implies the implementation of an air-to-air heat exchanger to pre-heat combustion air; while the third is based on an indirect water heater, whose goal is to heat clean water flows up. Finally, the fourth methodology Williams introduced is a direct water heater, utilized to heat back water.

As for standard steam boilers and Ccgt (Combined Cycle Gas Turbine) heat recovery boilers (with supplementary firing), EnerOp director pointed out that «losses from the gas input to the boiler can be split into three main categories: the end user, or the Yankee steam system; the distribution system and the boiler system itself». In addition to this, Rob Williams also recalled that losses can be further split into the two classes of direct and indirect losses. Direct losses are caused by convection and radiation, by a 2-3% rate; blow down events (up to 5%); the presence of exhaust gas in the chimney (20%). The flow of steam to the de-aerator was the only form of indirect loss that the manager and co-founder of EnerOp mentioned.

Having stated that the major loss is due to gases from the chimneys or stacks, he noticed that 17% – out of the 20% overall leakage – is given by latent heat, tied up, as a result of combustion, in the water steam. Considering that «even with a traditional economizer and combustion air preheat the minimum temperature in the stack remains around 100 °C», Williams suggested that one of the ConDex units’ most remarkable features is the ability «to capture the energy that is usually lost in exhaust gases». In fact, the condensing heat recovery solution’s design is such that the manufacturer ensures an increase (to 95%) in the efficiency of the boiler itself. Furthermore, the temperature of exhaust gases can therefore fall to a 40 °C low, and being the system fully redundant it has «a zero impact on boiler or process operations». The way the platform operates is rather easy to describe. «The incoming cold fluid», as Rob Williams explained, «enters the condensing exchanger; whereas cold water reduces the tube temperatures to below dew point, causing steams to condense out and thus recovering latent heat, avoiding any possible contact between the flue gas and heated liquid».

Condensed water can also be recovered from exhaust gases, despite in this case recovery rates can significantly vary, «depending on the application». Certainly, this resource can be reused in a number of forms, ranging from boiler make up water to process water. At the Tissue World technical session, Williams distinguished between the heating applications that the ConDex unit can be destined to; and the utility of a Ccgt system in hot climates. As for the first ones, he underlined that «condensing economizers require a cold heat sink to strip out the remaining, sensible and latent heat from the exhaust stream», and units can be designed both to heat a single or multiple heat sinks». These ones typically include boiler make up water, «the most common application», condensate from de-aerator; process water; condensate reheat, «possibly after combustion air heating». When needed to operate in hot environments, the ConDex unit «can capture a large quantity of energy from the CCGT steam generator exhaust gases and high pressure hot water generated in the ConDex solution can be used to power the absorption chiller».

Finally, «chilled water coming from the absorption chiller can also be used in order to chill the air inlet to turbine, increasing the turbine output». This increase is estimated at around 20%, and it is worth to notice that according to EnerOp the application can «supply dryer air to turbine condensing moisture from the air inlet», when used in humid environments. Built in fiberglass and suitable to be tailored to a number of different application, the solution can be designed «for any number of boilers», of any size, and can be either equipped with a PLC control panel; or a distributed control system (DCS). A dedicated monitoring software provides users with a real-time analysis of energy savings and recoveries; together with measurements of the inlet and outlet water temperature. The effectiveness of this solution was witnessed, in Williams’s words, by such installations as the one that, commissioned in 2012, EnerOp accomplished at the SCA Barton US facilities, resulting in a 300,000 dollars per year saving and in the usage of recovered energy for heating the boiler makeup water to the deaerator. In Ecatepec, Mexico, a ConDex unit has allegedly been operating «trouble-free since 2010». It consists of two connected boilers and manages to recover around one Megawatt of energy, with exhaust gases exiting at a 45°C average temperature. The solution heats makeup water before entering the deaerator, thus ensuring a two tonnes per hour saving in steam to the deaerator itself. Finally, in Sahagùn, located in the Spanish province of León, a ConDex system is connected to one single boiler and recovers as much as 200 kilowatt of energy, with gases leaving the tubes at a 50°C average temperature. Installed in 2014, it has been operating uninterruptedly ever since. 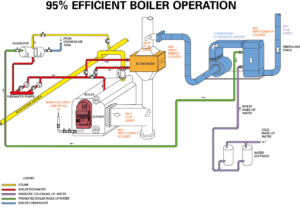