«Inspiration comes from the physical handling of my materials and long stretches of meditative swimming. I need full hands and an emptied head». This is what we are told by the Greek artist Zoe Keramea, who lives and works in Athens and New York.

Zoe Keramea, was born and raised in Athens, Greece. She explores the universe of plain bent surfaces using, among other techniques, sculpture, engraving and drawing, as well as ceramics. We decided to talk about her work and, of course, of the works made from paper. There are many of them, also mentioned in the beautiful book by Bianca Cappello “Carta Preziosa”.

Now she has a studio in Athens and a printing press, a Neckar Press-BR7, manufactured by Reinhold Breisch in Neckartenzlingen, in Germany. She also has a live-work studio in SoHo, in NY because «however, I do work everywhere I am and all the places I live are workshops, more than homes». 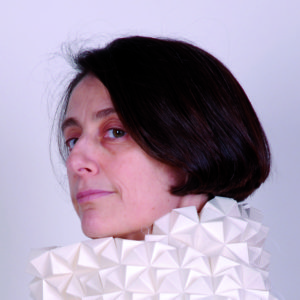 Zoe Keramea, how did you start?

«As a child, I spent a lot of time at the offset printing factory owned by my father’s family, where also boxes and paper bags were made and printed. The leftovers from the cutting machines, as well as misprinted labels and boxes were keeping me amused for endless hours, in situ and at home.

I was making objects and “art” as long as I can remember. I used to fill my pockets with useless scrap that I often incorporated in my play with my friends or in drawings, collages and constructions.

For instance, a discarded watch band would become the belt of a collaged girl in a particularly well received work when I was four years old.

All my school books were covered with drawings on every white space surrounding the text, on every page – teachers often asked me to gift them the book at the end of the year as a memento».

Where did you study? What has your training been?

«I received my Meisterschueler Degree from the Universitaet der Kuenste (University of the Arts) in Berlin, where I studied painting, drawing, all printmaking techniques – intaglio, woodcut, lithography, silkscreen –, paper restoration, bookbinding, art history.

In 1989 I received a Fulbright award to develop a new printmaking process at Bob Blackburn’s Printmaking Workshop in New York.

This two stage intaglio matrix printing process was later called “zoetype” by an art publisher in the US. The first examples were shown in 1987 at Goethe Institut and Eleni Koronaiou Gallery, in Athens.

The “Print Collector’s Newsletter” in New York presented in 1990 some of the early “zoetypes” created in NY. Since then I have participated in more than one hundred group shows in galleries and museums around the world and showed my work in twenty individual exhibitions. I have been teaching workshops in universities and museums and have published artist’s books and games».

How would you describe your work with paper?

«Explorations of enfolded surfaces in different media could be a short description of my work. Paper as an enfolded surface is the primary material; I use it to print, to draw, I fold it into 3D modular units which I sew together to form small or large sculptural works, I fold it and cut it, and sometimes I make stencils of it.

My explorations of printmaking led me outside of the confining frame that traditional painting and drawing and even printmaking itself are trapped within.

In all my work I deal with the manipulation of surfaces; they are overlain, folded, enfolded into themselves, cut or even tied in knots.

The works sometimes transition between two and three dimensions.

Flat strips of paper are folded in upon themselves to form hexahedra-triangular dipyramids.

Using the dipyramid as a module I build new modular units, flexible or rigid. These are then sewn together into increasingly complex forms to create sculptural works such as DoubleTorus, Seedpod, Shadow, Spiky Circle».

You compared your works to moths: can you explain a bit better?

«I find interesting the very contradiction between the rigid and unchanging geometric form of the modules and the variability and flexibility that I give them. The form is determined, the use to which I put them is decidedly not. The hard ambiguity of the dipyramids contrasts with the fragile and often diaphanous materials they are made of; paper and thread.

The paper surface is turned and twisted into space, as in the flexible sculpture series “Moths”, twelve of which were shown at the Museum of Contemporary Art – Australia, during the 18th Biennale of Sydney, in 2012.

Moths are emblems of transformation from the earthbound to the ethereal. They are very fragile creatures as perhaps we are. They are nocturnal insects drawn to the light.

In Greek we call a moth a “psyche”, which means “soul”. The word is personified in the ancient myth of Eros and Psyche.

The transformation – metamorphosis – in these works is also something literal as they pass from a two-dimensional to a three-dimensional existence.

A flat strip of paper is folded into a hexahedron and joined to hundreds of others with thread to become a “Moth”. The “Moth” itself can be folded inward as it has now become a flexible structure that can take many different shapes.

The “Moths” are named after real moths that they faintly resemble. They are as fragile as our world is.

I like to provoke the viewer to engage with the work, let the work play with his perception, as in paper cut-outs, where the viewer should decipher a text in the pattern of the image.

The paper cut-outs are the starting point for my limited edition artist’s books, ceramics, but also puzzles and games».

You published several books and plays, and you also run several teaching labs. Can you tell us about that?

«Often I invite the public to participate and physically play with the work as in boxes, a work in two states, six couples. It is a limited edition multiple consisting of twelve boxes, signed and numbered by the artist in an edition of 100 each, with 10 artist’s proofs. Painted and scratched directly onto film and offset printed on Aqaba paper. Hand-folded by the artist.

The boxes are depictions of twelve knots (6 couples), positive – negative mirror images. Once folded into boxes, they can be arranged like a tiling puzzle in many different ways, horizontally or vertically, using some couples, or all couples, or more than one set of twelve, to create different patterns. Sometimes the work becomes a game as in Serpentine, a puzzle consisting of 36 tiles, or Chronos, a limited edition memory game, a boxed set of 120 squares, comprising 60 pairs.

The multiplicity of states and interactivity are also seen in the App for the iPhone and iPad, Mandala Memory, a digital game, available at the iTunes App Store in the US. It consists of 116 mandalas hand-cut from mulberry paper».

Do you have favourite papers?

«Stonehenge, Lana Aquarelle, Saunders Waterford, Fabriano, Arches, Hahnemuehle and different kinds of Japanese papers, each used for a different purpose. I also like to use leftovers from my cut-outs or printed matter as I did for the black and white paper jewelry pieces, shown recently in Milano (Italia), at Galleria Rossini».

Which are your main customers?

«Usually people who are familiar with my work and have a convoluted mind like my own.

Also the Benaki Museum Shops in Athens carry a number of my paper works: posters, artist’s books limited editions puzzles and games. My paper works are also in the collection of the Museum of Modern Art in NY, The Victoria and Albert Museum, the Princeton and Harvard Libraries».

Which is your favourite operas among yours?

«In 1994 I did a series of graphite drawings, Knots I – X, that were very long and narrow like pillars. Each drawing is included in the next one and intertwined with it in a mental space created for the drawing. There is tangling, looping, knotting, mirroring, superimposing, intertwining on an underlying structure of ratios and movements; like a musical phrase and its restatement with an additional element.

These drawings were the starting point for an investigation and study of aesthetic and formal concerns followed in my subsequent work».

«A series of one of a kind paper jewelry pieces, inspired by my participations in the wonderful book “Carta Preziosa” http://www.skira.net/en/books/carta-preziosa, by Bianca Capello and the paper jewelry show at Galleria Rossini, last May in Milan. I am also working at a visual brainteaser game, inspired by the ceramics of the Acropolis Museum in Athens».

Dreams in the drawer?

«Large scale drawings on long rolls of paper, horizontal and vertical, and large scale installations of modular sculptures made of folded paper units».