At Tampere University of Technology a new method was developed to improve the adhesion between cellulose and PLA, biopolymers with low environmental impact.

Resistant, repellent, «high barrier» but above all sustainable. These are the characteristics of food packaging and disposables (such as plates and glasses) of the future. Thanks to new plasma technologies it is possible to modify, improve the adhesion of cellulosic materials to coatings that respond with these qualities without changing their intrinsic properties. This was shown by Johanna Lahti’s team at Tampere University of Technology, for PlasmaNice  promoted by EU for the development of new eco-friendly materials thanks to plasma technologies. By Atmospheric Pressure Plasma Treatment, the researchers have greatly improved cohesion between paperboard and PLA (PolyLactic Acid), bio-polymers derived from corn, obtaining functional and eco-sustainable polylaminates.

The main objective of PlasmaNiceis to developequipment for in-line atmospheric plasma deposition of functionalnanocoatings on various fibre- and polymer-basedsubstrates. The projectaimsat the development of a packaging material with an overallbetterenvironmental performance. Goals are reducing the consumption of rawmaterials, a drasticimprovement of recyclability of conventionalfossilfuelbasedplastics and/or theirreplacement by renewablebio-based (and biodegradable) materials (PLA and paper for example). PlasmaNiceis a four-yearprojectstarted in 2008 and ended in 2012. PlasmaNice is funded by the European Union under the Seventh RTD Framework Programme. The consortium is made up of universities, research institutes, and companies, from eight European countries.

Up to date, extrusion coated paperboard that is paperboard coupled with oil-derived plastics has always been used for food packaging as well as for disposable tableware. These polylaminates are water, fat and oil resistant, besides being gas resistant too; however they are difficult to dispose of and, due to the presence of plastic, they pile-up in the environment. PLA’s are an eco-sustainable alternative to be used for this type of products. PLA’s are plastic polymers in all respects, but unlike common plastics, such as cellulose, they are derived from renewable resources and are biodegradable. These features allow designing eco-friendly packaging and disposables with low environmental impact as they may be recovered and disposed of more rapidly.

However sustainable materials aren’t enough to have eco-sustainable and high-quality products. In order to have products with functional containment and protection features it is essential for cellulose and PLA to be perfectly welded together so to avoid delamination phenomena. Thanks to Atmospheric Pressure Plasma Treatment this goal has been reached!

In the paper industry plasma applications have been studied for several years in order to functionalize surfaces, for example by making them more hydrophobic, by getting better printing ink absorption, but also by improving their adhesion to various polymeric substrates. Ionic bombardment, in fact, changes the topography of cellulosic substrate by increasing roughness at molecular level and consequently, interaction with other materials, such as plastics, for example.

But how do plasma treatments work exactly? Plasma is known as the fourth state of matter, it’s a high-energy gas consisting of a mixture of ions, free radicals and photons. The energy by this particular gas allows changing the surfaces without affecting mass properties (bulk proprieties). Plasma flow is generated by submitting any gas, even simple air, to an electric field. This causes acceleration of free electrons that collide with gas atoms and molecules; depending on the type of collision and electron energy, ions or excited species are originated. Chemically reactive species are able to modify the surfaces with which they come into contact, by removing molecules (cleaning) or by adding functional groups (etching).

The purpose of Professor Lahti’s team was to experience an advanced technique of plasma treatment in order to efficiently combine two completely different materials together: cellulose and PLA’s. At first, the paperboard samples were treated with corona plasma, a technique already used in the paper industry to modify cellulose surfaces, later with Atmospheric Pressure Plasma Treatment: a method that uses high density plasma, i.e. with higher density of reactive chemical species. 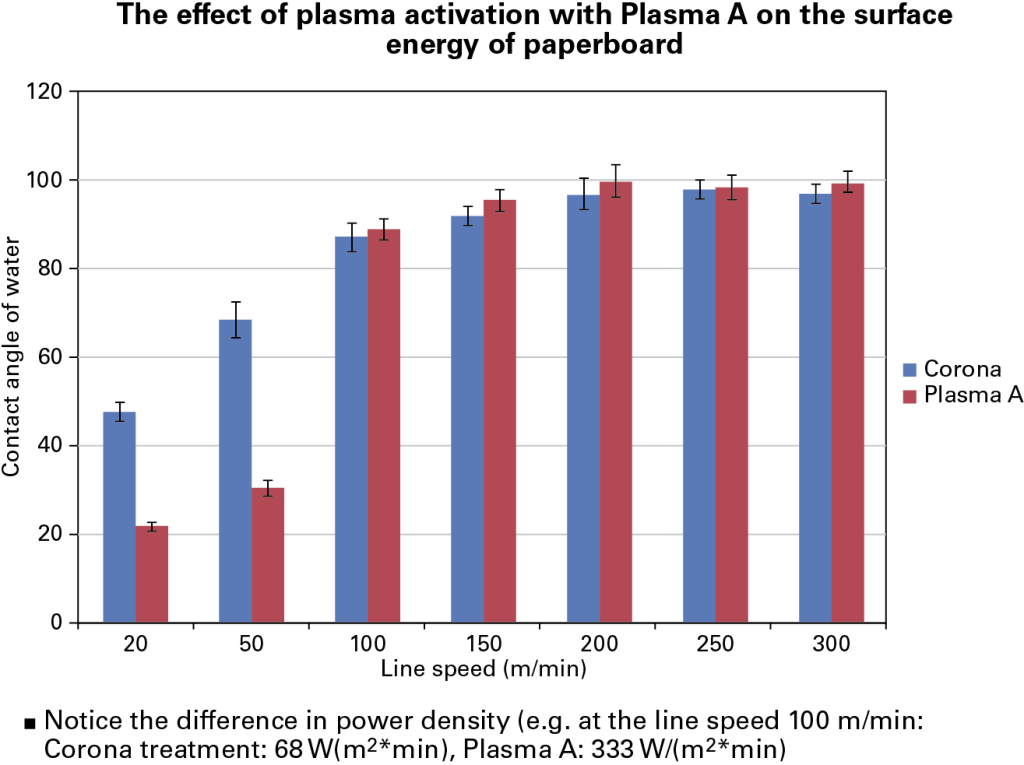 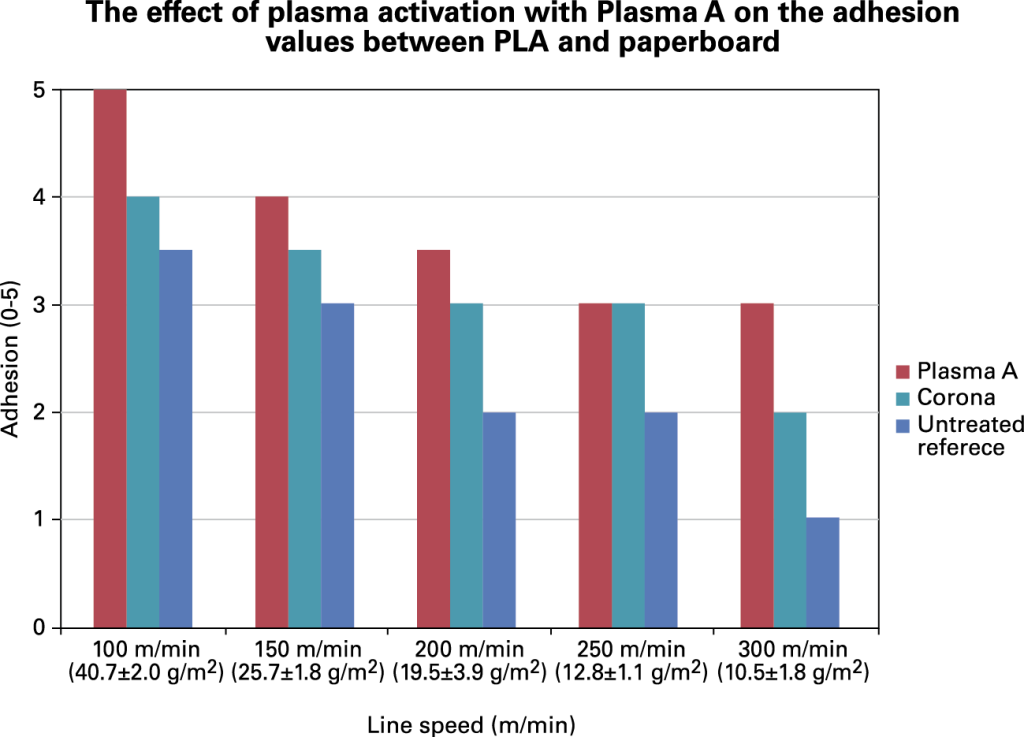 Researchers have managed to further improve the adhesion of the two materials by subjecting paperboard to further plasma treatment, but this time based on nitrogen and acrylic acid in order to add functional groups to the cellulose surface so as to create a greater number of crosslink between cellulosic fibers and PLA’s. Experimental results show that Atmospheric pressure plasma treatment is much more efficient than orderly setup traditional techniques, such as corona plasma.

The work carried out by the research team introduces to the use of new technologies for the production of innovative and sustainable cellulosic materials. As a matter of fact, by this treatment it will be possible in future to launch on the market hybrids with the ecological characteristics of cellulose and the chemical-physical properties of plastics.