With paper she brings life to works of art, objects, surprising installations, sumptuous clothes, sculptures of women, flying creatures and also jewellery, design objects, lamps and vases which make the surrounding space a setting of great beauty: we are talking about Caterina Crepax, whom we met in Milan at her recent exhibition and who told us about her new products.

We are in Milan and, specifically, in the workshop of the Japanese artist Natsuko Toyofuku http://natsukotoyofuku.com/ with whom Caterina Crepax https://www.catcrepaxpaperart.com/has begun an interesting synergy: here you feel you are in a dream, as if you have entered a 3D fairytale. She has always been sentimentally inspired by the work of her father, Guido Crepax http://www.valentinabyguidocrepax.com/en/guido_crepax/, the well/known creator of the most sexy and sophisticated heroine of the Italian cartoon book Valentina https://www.catcrepaxpaperart.com/, and of stories in pictures, which, in fact, it would be simplistic to call only comic strips. Here, Caterina reveals her artistic gene which she makes totally her own, launching creative experimentation and research. Known for her marvellous paper clothes that she makes with a wide variety of materials – tax receipts, shredded documents, perforated edges of computer printouts or left-overs from printing work – Caterina, this time also, evokes an imaginary world straddling reality and fantasy: an absolutely magical and virtual planet, made wonderfully tactile, physical, concrete and sculptural, showing her works of art, hand-made with constructional actions such as “cut, assemble, fold, crumple, roll or twist”. 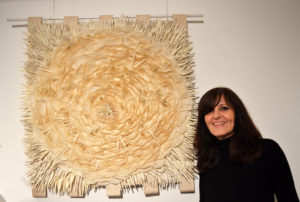 It is not the first time that we have met her, but it is the first interview that we are doing for this magazine Paper Industry World – the other interviews were published in Industria della carta (Paper industry) http://www.industriadellacarta.it/– and it is always an emotional experience to see, touch and admire these “fantasy creatures”, so real and authentic at the same time. In the case of the exhibition Carta di Un Altro Mondo [Paper from another world]which was held in Milan last December, the artist wanted to give a 3D shape to fantastical creatures from one of her father’s works in particular, even if a less well-known one: “The Pirate Spaceship”, a story from 1966 set in a future which, for certain aspects proclaims the aesthetic fantasy of the Star Wars saga. A beautiful and fleeting exhibition which she explained in this way: «I was inspired by one of my father’s comic books which is called “The Pirate Spaceship”, a story for children which tells of the space adventure of these pirates dressed in sixteenth century clothes – because my father enjoyed mixing up the eras – who end up on Neptune, where they find corals and marine creatures. I have always looked at them and found in them some details of my work, and I have tried again, therefore, to make them from paper; they are quite strong memories».

Beside the characters of the Pirate Spaceship, in this exhibition we were also able to admire various design objects, lamps and vases, always with her trademark, the unmistakable “curl” and the “sea urchins”. An art which almost acts as a liberator of emotional memory, as she herself says: «I was born a very timid person, I like to communicate my own emotion, my own amazement». Discreet and reserved, Caterina knows how to talk about herself genuinely, maintaining a low profile and, at the same time, showing a contagious enthusiasm for everything she does: like her recent collaboration with Icma http://www.icma.it/ and the Istituto Europeo di Design – IED [European Institute of Design] https://www.ied.edu/.

“Milano Tailor Made” to celebrate 50 years of IED

The workshop, designed and run by Caterina Crepax, was thus held at the headquarters of the Triennale, for the 50th anniversary of the foundation of IED-Istituto Europeo di Design and as part of the initiatives that will mark Icma’s 85 years of creation and innovation in paper for packaging, corporate publishing and luxury brand information.

The creation of this large scale installation was entrusted to the IED students of Fashion, Visual Arts and Design, guided by the artist who, with paper, expresses her poetry, constructs tactile metaphors, unusual objects, designer clothes. In order to create the work of art, various types of Icma sartorial paper were used – a range which includes textures, colours and finishes which form part of the collections of carte Prêt-à-Porter [Ready-to-Wear papers] – combined, assembled, manipulated and processed with a multiplicity of artistic techniques: from amongst the Icma sartorial paper, Caterina has chosen paper from very recent collections Woods– inspired by the texture of the wood, the tactile effects of which are surprisingly natural –, Coppers– the papers which become copper and represent the changing of colours under the effects of time and weather –, Opaques– where the inspiration from architectural and interior design materials is evident in the textures and ranges of colours and finishes. To complete the series of papers used in the project, there are collections which have characterised, over the years, Icma’s stylistic choices, like Papikowhich presents a grainy surface which enhances the bright colours meant to be noticed. Also present in the workshop “construction site” are papers whose surface is the perfect mimesis of metals in the various polished and reflecting tones, and which give light: the Gemmacollection displays high-tech finishes in unusual colours like green gold, pink and a brilliant sapphire. Very different types of papers are those inspired by velvet, an 85 year old Icma speciality, soft and seductive to the touch, made in a vast range of colours.