The European paper industry warmly welcomes today’s decision by the European Parliament to block proposed legislation which would have had the effect of classifying waste paper as «recycled» paper before it has been recycled – Motion for a Resolution on the draft Commission regulation on defining criteria determining when recovered paper ceases to be waste. . This vote in Strasbourg will save more than 20,000 direct green jobs in the paper industry and an estimated additional 140,000 indirect jobs in Europe.

«We are glad to see the European Parliament remembered that the original purpose of defining when something is no longer to be considered a waste was to facilitate recycling not to obstruct it,» comments Teresa Presas, Director General of the Confederation of European Paper Industries (Cepi), on the outcome in Strasbourg. «If this proposal had become law it would also have burdened the global environment with needless additional energy use and emissions. It’s a good decision.»

If this legislation had passed, it would have relaxed the EU’s waste management rules and triggered a flight of waste paper out of the EU to Asia, pushing up prices in Europe and undermining the quality of waste paper available for the European recycling sector. This in turn would have crippled the world class paper recycling in the EU, the result of years of investment by the paper recycling industry here. Paper recycling in Europe would likely have dropped from about 47 million tonnes per year to 37 million tonnes, leading to closures of mills, including many small and medium-sized operators.

Today, the European Parliament plenary backed the earlier decision of its specialist environment committee to reject the Commission initiative, voting in favour by 606 votes to 77. MEPs insisted that the Commission had not properly assessed the impacts of its draft regulation on paper recycling and in shipments of waste paper to third countries. The Parliament also argued that the proposal was not compatible with the aim and content of the EU’s basic framework directive on waste and exceeded the implementing powers conferred on the Commission by that directive – a comprehensive rejection.

In September this year, CEPI temporarily dumped bales of waste paper in front of the Commission’s headquarters building in Brussels to draw attention to the problem. Shortly after, the EU member states voting on the issue failed to reach a majority on what to do, leaving it up to MEPs to decide whether or not to send the Commission back to the drawing board.

«We are delighted that the voice of reason has finally emerged,» explains Jori Ringman-Beck, Cepi Recycling and Product Director. «We now hope that the Commission’s environmental protection department will reflect on the content of this resolution and revise the criteria for determining when used paper is waste and when it’s not.»

Cepi is not against defining criteria to determine when used paper ceases to be classified as waste, but maintains that the approach now needs to be fundamentally revisited and aligned with the newer more progressive criteria that the Commission has developed lately for other material streams. In general, the old approach, which was carried over by the Commission into the paper proposal just rejected in Strasbourg, has hardly been implemented in practice – indicating that these measures have not been able to capture what is needed by the market in reality. 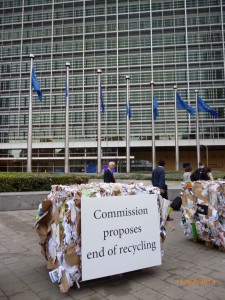