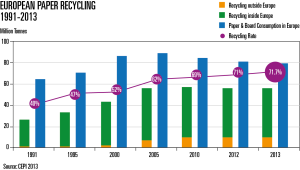 The paper recycling rate in Europe reached 71.7% in 2013. The total amount of paper collected and recycled in the European paper sector remains stable at just over 57 million tonnes, despite decreasing paper consumption in Europe.
Recycling has increased by 45% (18 million tonnes) since 1998, the base year for the first voluntary commitment set in the European Declaration on Paper Recycling by the European Recovered Paper Council (ERPC).
The European paper recycling rate is starting to level out and keeping it at a high rate is becoming progressively more challenging. Not only are quantities changing but so are the different paper consumption patterns.
The continuing sharp decline in newspaper consumption will significantly affect overall paper recycling levels, as newspapers are traditionally one of the best recycled paper products along with corrugated boxes. Conversely, tissue and sanitary paper consumption is
increasing but cannot be accepted for recycling due to hygiene reasons. Overall, 21% of paper consumption is not recyclable or collectable.
The large majority of the 11 European countries currently still under a 60% recycling rate have reported an improved performance. In parallel, 13 European countries have already exceeded the targeted 70% recycling rate. Paper fibre is now recycled an average of 3.5
times in Europe, far exceeding the world-wide average of 2.4.
«Making recycling easy and simple year after year requires a huge effort by the paper value chain, and we are pleased to report the positive results», says ERPC chairwoman Beatrice Klose. «Despite challenging circumstances, paper recycling has continued to perform
consistently well», she concludes.
Secure access to raw materials has become an increasingly strategic economic issue in Europe. Paper recycling is truly an industry “made in Europe”. In line with EU policies, this industry should be properly safeguarded to remain so. The paper recycling sector is ready and able to add more green jobs, skills and innovations to the European circular economy.