Formerly known as Portucel Soporcel, The Navigator Company is a paper producer based in Europe and last year posted revenue of 1.6 billion euro, with a 5.6% growth over 2014. By recently acquiring AMS, the Portuguese group aims to consolidate its position in various sectors.

Headquartered in Setúbal, Portugal, The Navigator Company – this is the new name of Portucel Soporcel, after the rebranding it underwent last February – sells in 130 countries worldwide and owes 75% of its overall business to office paper. Highly specialized on renewable energy, as we will observe later, the firm decided last year to strengthen its position in the pulp industry, that merely represents today 3% of its annual revenue. And this is the reason why the firm, that recorded a 384.6 million euro turnover in the first quarter of 2016, incorporated AMS BR Star Paper, also based in Portugal and mainly focused on tissue products.

«The tissue market», as CEO Diogo Da Silveira told Paper Industry World, «can offer The Navigator Company a number of interesting opportunities, given that this segment displays a 2-3% yearly growth rate. The operation will allow us to gain further specific skills in this industry as well as to build upon the experience we have». One of the most remarkable aspects of the business strategy that AMS has implemented consists in the fact that its plants were “built next to a pulp mill”, as Da Silveira pointed out, and that this facility is completely integrated “with the pulp delivered through the pipeline”. The acquisition, in Da Silveira’s vision, is only the first step of a much more ambitious expansion project. «Our goal», the CEO stated, «is to quickly change our status from that of a niche player in the segment to that of a leading global provider, by doubling our production capacity and implementing new facilities by the end of 2017. And we want to accelerate on integration in order to enhance our competitiveness». The Navigator Company is confident its portfolio will manage to effectively address customer needs, thanks to the expertise it has developed in the Eucalyptus Globulus fibers, for instance, that grant its products an “outstanding softness and quality”.The demand for soft tissue is rocketing worldwide and «the share of pure virgin fibre, the central raw material of our products has been growing in the last years in Europe too», as Chief Executive Officer Diogo Da Silveira considered.

From Mozambique to Shanghai

In addition to this The Navigator Company began to work on an integrated forestry and industrial initiative in Mozambique, where after partnering up with the World Bank it can now rely on a 7.5 hectare area (about 75,000 square meters) and a workforce of 130 skilled employees. The program will contribute to improve the quality of life of citizens in the provinces of Zambézia and Manica but also boost the Portuguese group’s productivity. The site is forecasted to become fully operational in the next five years. «The major change for our business model», Da Silveira noticed, «will be to deliver the pulp we will manage to manufacture in Mozambique to the Asian and namely to the Chinese market. We believe the pulp market is posed for a significant growth due to the different applications it can serve, including packaging, and to the request from China, where domestic production is hindered by the lack of water and trees. Although we have, respectively, a 10% share of the North American and 13% of the African market, we need to consolidate our position in Asia, where our presence is much less meaningful. And thus, we need to invest more». One of the most important aspects of The Navigator’s policy lies in the attention it pays to renewable sources, whose massive usage make the firm look like a close loop company capable to fulfill its energy requirements with two biomass power stations and three cogeneration plants. «These plants exploit forest biomass and timber by-products, derived from the pulp manufacturing processes», as Diogo Da Silveira recalled, «and our industrial units represent today a model of waste management, recording an 80% waste reclamation rate. Renewable energy accounts for about 70% of the energy required to produce our printing papers, while the European benchmark is 57%».

The energy to compete

Throughout the last decade former Portucel Soporcel has managed to reduce its consumption of water by a 41% rate, thanks to the recirculation of water coming from the pulp washing circuits, but its future plans look far more ambitious. «After investing some 200 million euro in renewable sources over the last eight years», Da Silveira considered, «The Navigator Company is now to turn its Setúbal Complex into the largest photovoltaic solar power plant ever installed in a Portuguese industrial site. The platform we are already completing will consist of 8,800 solar panels, thus representing one of the largest and most efficient plants of this kind in the whole world. The operation will then allow us to produce an important part of the electricity we need, on our own». As for the strategic importance that Italy has in The Navigator Company’s overall business, Diogo Da Silveira stated that the country plays a “fundamental” role for the producer’s activities, and the figures he presented confirmed his view: «We have been operating in Italy for 25 years (with branch offices in Bussolengo, near Verona, ed)», he said, «and last year alone we sold nearly 120,000 tons of paper on Italian soil, generating a 90 million euro turnover, approximately. More than a half of our sales in Italy comes from branded paper but, furthermore, 48% of the paper we deliver belongs to the premium segment, and these aspects are very important for our business». Obviously, Diogo Da Silveira, an engineer who previously sat in the board of a number of top notch Portuguese companies after working as a partner at McKinsey, does neither ignore nor underestimate the challenges that the brand is to face in the Italian arena: «The main challenges and strategies for the Italian market», he told Paper Industry World, «will deal with price and contribution optimization, cut size standard correct positioning and folio development. But indeed Italy is one of our key-markets and represents the present and the future of The Navigator Company and this is the reason why our aim is to boost our investments in the country, creating dedicated teams in order to generate further and more significant growth opportunities across all segments». 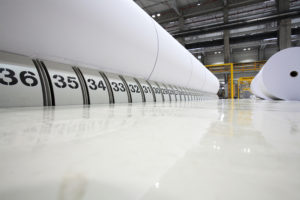 Raiz, the root of knowledge

Of course, it takes remarkable investments in research and development to stay ahead of competitors in such a challenging arena as the paper and pulp industry is. The efforts and strategies thanks to which The Navigator Company traditionally pursues the target of innovation are all grouped under the Raiz label. In Portuguese the word raiz means root, so to indicate that R&D lies at the very heart of the producer’s business. «Our R&D units operate both on processes and projects», the Chief Executive Officer said, «for an average yearly value of 3.6 million euro. The company runs dedicated R&D facilities where teams of specialists focus on the enhancement of our solutions and to improve the integration with forestry. In terms of productivity, we largely benefit from these activities and our research and development groups are looking forward to optimizing them, also by cooperating with the innovation centers that we own in such countries as Brazil». After launching, as a genuine pioneer, a series of innovative kind of papers, The Navigator Company is now willing to grow further and intentioned to strengthen its focus on research thanks to the usage of recent, dedicated EEC grants and programs. «Our mission», Da Silveira concluded, «is to boost competitiveness in the sector through the improvement of pulp and paper quality, by cutting production costs, minimizing environmental impact and through research into new products and processes. But at Raiz we can also find the development of innovative concepts, by launching distinctively positioned brands and by introducing products aimed at consumer segments which we had not previously targeted, in the office paper sector».