Researchers from Linköping University (Sweden) have developed the paper of the future.

As is known, in the next few decades increasingly marked population growth and growing industrial activities will require a much higher energy production than the current one. To this end, several studies have been carried out on new electric energy production methods, in particular from renewable and clean energy sources; the search for methods and materials capable of storing larger quantities of energy have been less significant, instead. From this viewpoint, worth mentioning is an interesting study carried out by researchers of the Linköping University’s Laboratory of Organic Electronics, Sweden, who identified and developed a new material called Power Paper: this is a special type of paper behaving like battery, as it is able of storing and preserving electricity.

This new material, whose production method is described in detail in the study published by the British journal Advanced Science, is made up of cellulose fibres similar to the fibres of common paper, which are broken down using a jet of high-pressure water. This procedure breaks the fibres down by turning them into cellulose parts with a diameter of 10-20 nanometres each (nanocellulose), i.e. 10,000-5,000 times smaller than the diameter of human hair, which is about 100 micron thick. The nanofibers obtained in this way are then covered with conductive plastic polystyrene (pedot:pss), i.e. an electrically charged, in a water solution. As it is not possible to go into the details of this topic in just a few lines, it should herewith only be said that this polymer is «doped» by adding solvents with a high boiling point to it, thereby making the fibres highly conductive from a ionic and electronic viewpoint and giving them mechanical properties that are similar to those of conventional paper. In practice, the fibres tend to form a kind of tangle, while the fluid between them serves as an electrolyte: the polymer thus forms a light coating around the fibres, thereby creating real «capacitator» sheets of paper. The material obtained in this way is a cellulose-polymer compound and features exceptional electricity storage properties thanks to the contemporary high conductivity of both ions and electrons.

To illustrate the enormous electricity storage capacity of the material, a round Power Paper sheet with a 15 cm diameter and a thickness of just few tens of millimetres for up to 1 F (one farad) electrical capacity. This is an amazing result, if one thinks that the 1 farad capacity is generated by devices, i.e. the so-called «super-condensers», which are as big as tuna cans, i.e. much bigger than a sheet of paper. It is not by chance that the capacities of normal condensers available on the market are measured in microfarads. 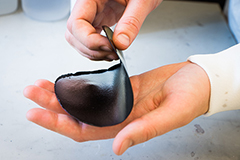 Besides the exceptional capacity, another very important characteristic of the material is that it can be loaded/unloaded hundreds of time and it takes just a few seconds to charge; furthermore, though slightly plasticised at the touch, the Power Paper has the same flexibility as normal paper, as a matter of fact it can be folded to build origami and small paper planes, as shown by some young students of the Swedish university.

The application and development fields of this new type of paper are manifold and cannot be possibly even envisaged, also because the survey published by the Linköping University has shown that the capacity of storing electricity could increase with the evolution of the study itself and its tests. Furthermore, besides the storage of electrical energy (i.e. paper sheets used like batteries) it is reasonable to think that the Power Paper can be used in many other fields, as it is a completely waterproof material. For instance, it can be used to build a new generation of flexible and foldable displays for TV appliances, digital magazines, smartphones, watches and computers. Besides, the production of devices of this kind would fully comply with the principles of the green economy, as the Power Paper is lightweight and can be easily obtained from simple materials that are easily available on the market, as well as being recyclable and reusable; furthermore, it does not contain any hazardous chemicals or heavy metals.

The Power Paper can therefore really be the paper of the future, as it meets the need of the world to identify new methods for electric energy conservation and use and is expected to become a common and largely used technology in few years. The challenge will be to turn this result, which is for the time being limited to academic circles, into a market solution that can be really used; the appeal goes to paper mills and companies of the field, which in the near future are called upon to accept this challenge and be ready when it comes to develop large-scale industrial production systems.