The Italian tissue producer Sofidel was one of the protagonists of the success stories that were officially presented in Strasbourg during a Reinvest 2050-related event. The initiative aims to stress the energy and environmental impact reduction strategies that the paper industry is implementing.

The Reinvest 2050 European program has ambitious goals. In first place, it aims to valorize and promote the usage of renewable energy sources, in order to cover the entire demand and to pursue the objectives that the European Union itself has set in these very field. Authorities have clearly stated in fact that within 2050 emissions of greenhouse gases must undergo an 80% reduction. The paper and tissue industry is traditionally a strong consumer of energy and raw materials and therefore backed the idea with great enthusiasm. The European confederation of paper industries (CEPI) is among the greatest supporters of this plan, which was originally dubbed To roots and beyond. In fact, CEPI was also one of the organizers of the thematic exhibition that the European Parliament hosted last February in Strasbourg. At the event, 21 success stories, about 16 companies and/or organizations, were presented. They all were focused on those technological innovation policies that can help them boost their productivity, in first place, and then to increase the overall environmental sustainability of their entire supply chain, as we will soon have the chance to discover. Moreover, as official sources pointed out, the fundamental idea that Reinvest 2050 builds upon is that to stimulate competitiveness and competition between one firm and another in the arena of low-carbon applications, in order to generate a virtuous circle and a domino effect, encouraging other players to adopt a similar roadmap and therefore create and spread new, innovative solutions. As a representative of the Italian paper industry, Sofideltook part in the event too. The company runs its headquarters in Porcari, near Lucca, in Tuscany, and has developed a long-time experience in the segment of tissue, since it was established 53 years ago. Sofidel also owns and manages the well-known Regina brand and serves the needs of both the European and the US market, thanks to its 20 manufacturing sites. At the end of 2017 its turnover was slightly above 1,75 billion euro.

The award that Sofidel was honored with in France also represented the finish line of a race that started early last decade and poised to continue in years to come, according to sources. «We firmly believe», as CPO Andrea Piazzollatold Paper Industry World, «that Sofidel was a true pioneer, in Italy, for the attention it always paid to the topics of environmental sustainability and social responsibility. This is the reason why we decided to give our initiatives greater strength, by launching our Suppliers sustainability award, that is also commonly known as 3S Award. This special recognition was ideated in order to valorize, promote, spread and – last but not least – to award the best practices that many of our suppliers have implemented; and that allowed them to stand out under the very points of view of social and environmental sustainability». The aspect of social responsibility (CSR, Corporate social responsibility) is crucial at Sofidel’s; and it witnesses the Tuscan tissue producer’s will to cooperate with its partner-companies by defining a detailed, common policy, based on the importance of essential values; and not merely on the guidelines of a business plan. It is then Sofidel’s belief that this approach is able to provide all players with a number of attractive benefits. «The role of the supply chain», as CPO Andrea Piazzolla observed, «is highly critical because it contributes to offer the rest of the world a clear portrait of what the company truly is; and an idea of what our daily activities are actually about. These are some of the reasons why it is so important to us that partners are committed, consistent, loyal to the proposition that Sofidel aims to deliver and – to wrap everything up – to our image». World renown fashion and non-fashion brands were recently, reportedly facing controversies due to their suppliers’ behavior, on which they had no visibility or responsibility. Such news proved useful for Sofidel to understand that many severe, albeit avoidable, issues, often hide deep in the various levels of the supply chain. «Our reputation cannot be put at risk», Piazzolla warned, «and it is our duty not to underestimate these perils, always doing our best to prevent every possible problem».

Sustainability goes together well with the expression: opportunity. Here, the opportunity is that to increase a firm’s competitiveness by standing out as a reliable vendor, whose market partners prove most sensitive to such topics as human rights, pollution, energy and environmental impact. They must show undisputedly able to take their wealth and health into account; together with those of the future generations. «Especially in a moment of economic recession», Piazzolla added, «sustainability can emerge as an important competitive advantage, and not just because of the more effective usage of raw materials and a savvier consumption of energy, for instance. Authorities certified that our supply chain was fully ISO 20400-compliant for two years in a row, as SGS Italia (a global specialist in inspection, verification, testing and certification services) clearly demonstrated with its audits. And this is the proof of how transparent Sofidel wants to be; and how sustainable it is».

To assign its Suppliers sustainability award, which is considered «innovative and important in order to promote the best possible environmental and socially inclusive practices», Sofidel carries out in first place an analysis of its suppliers’ behavior, building upon a series of specific parameters. Respect is the keyword: respect for environment, human rights, labor standards (fair and safe working conditions), plus the adoption of effective anti-corruption policies. All of these aspects are then examined thanks to a dedicated questionnaire, inspired to the Ten Principles of the Global Compact Network. The Global Compact Network is a foundation, backed and supported by the United Nations and committed to create an «healthy» economic policy. The veracity and accuracy of each partner’s response undergoes further controls by SGS Italia itself. On top of this process, answers are ranked in a 0-100 scale and subsequently divided into three different groups. Each of these groups is characterized by a relevant color and, of course, the most virtuous players in the supply chain are marked in green.

«Green is the color», CPO Andrea Piazzolla explained to Paper Industry World, «of those suppliers that managed to achieve an 80-100 points score, followed by those indicated with the yellow color, who are already undergoing a process of sustainable growth, but whose path towards a complete sustainability is yet to be enriched and completed. Red partners lie at the lowest level: this surely means they will have to strive to reach their targets but their margin of improvement is significant». This is the fundamental aspect of the entire 3S Award philosophy: everyone can make progresses and Sofidel is committed to support their evolution. It is no surprise, therefore, that the overall number of green suppliers has been growing steadily, according to Sofidel’s figures. Piazzolla stated that last year 47-48% of partners were in the green category. Most of all, nonetheless, the award showed extremely useful in order to identify the most environmentally impacting activities of every partner company; and how to embrace a more sustainable business and manufacturing model. 13 product categories are currently considered at risk, and most of them in the segments of industrial commodities and raw materials in general, that hosts some 1,800 of Sofidel’s suppliers. Over the years, the Italian producer has also achieved the Ecolabel and ISO 14001 certifications, only to name a few. The intention is that to draw up by the end of 2020 a so-called sustainability ranking, according to Andrea Piazzolla’s forecasts. Logistics, in particular, could benefit from a series of improvements; although human rights-related issues are to be considered the top priority. No cases of oppression, violence or exploitation was recorded: what Andrea Piazzolla suggested is that there is still much to do to ensure the respect of all religious beliefs and traditions; and to guarantee the observance of all religious precepts. Furthermore, the Chief Purchasing Officer noticed that big corporations are more familiar with the crucial concepts of corporate social responsibility than small and medium businesses, where he is confident they will gain ground in the long run. It is no coincidence that the highest numbers of red and yellow suppliers are, in fact, SMEs. The supply chain should nevertheless be strongly devoted to sustainability and social responsibility, according to Sofidel, because these terms can also be considered as a synonym of quality. 72% of Sofidel’s annual expense comes from green partners, according to estimates; and sustainability is a pillar of the firm’s development roadmap. As a part of its impact reduction strategy the Tuscan tissue specialist has recently adopted a fleet of hybrid vehicles and is now looking forward to replacing plastics disposable objects, in its offices, with other alternative materials. 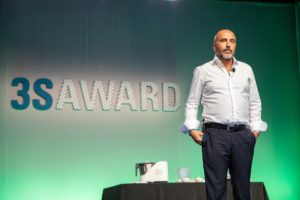 «What the paper sector needs is an Industry 2050 program to support each organization in implementing its own, effective carbon emission reduction strategies». These are the words with which Massimo Medugno, managing director Assocarta saluted the presentation of the Reinvest 2050 event in Strasbourg, last February. Massimo Medugno, again, added: «In fact, the Roadmap 2050 that was launched in Italy nearly two years ago represents an ambitious plan. And it is clear that its targets can only be achieved once we manage to develop a suitable and successful regulatory framework».

Anyway, according to recent researches, regulatory expenses account for one-third of companies’ overall business profitability, in the paper industry and it is therefore investments and R&D activities are unlikely to increase, given the scarce available budgets. «In order to concentrate on long-term investment plans it is nowadays, more than ever, mandatory to reduce energy tariffs, in our country, where they still display significantly higher than in the rest of the European Union». Roadmap 2050 was developed under the aegis of the European Climate Foundation (ECF) and aims to offer independent, objective and practical analyses about the continent’s environmental condition, with the goal to give birth to a low-impact and low-emission industrial and business paradigm.