When the paper compares the dichotomies of the universe encounters “The sights and sounds of the Cosmos”: a work realized for the Lucca Biennale 2018, for which the author has had to face and solve one of the biggest challenges of structural stability.

His name is Ankon Mitra,he is an Indian architect and designer who deals with the art of origami on a large scale. His work represents the universe and its chaotic aspect, which is soundless to our ears: this is a huge space, that we imagine to be quiet, which is however the backdrop of strong events, like collisions between nebulas. This dual nature is typical of the universe and can be perfectly conveyed by the origami technique through the intersection of mathematics and architecture. And this dual nature can be found also in the work of art titled “The Sights and Sounds of the Cosmos”, which was created for the 2018 edition of Lucca Biennale 2018 under the title “Caos e silenzio” (i.e. Chaos and silence”). This was definitely a unique opportunity for an author like Ankon Mitra, who is used at creating one or two meter long works of art, as it enabled him to overcome major challenge, i.e. using a fragile material like paper for a big-scale origami. 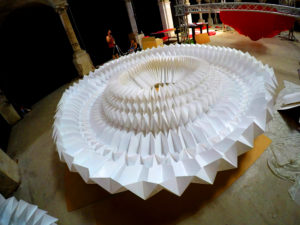 From your biography we see that you are an Indian architect and designer who is dedicated to the art of origami on a large scale. Would you briefly talk to us about yourself, from a professional point of view?

«I am a practicing architect, and Studio Director (Landscape) at Hexagramm Design, which was established in 2007. The head two verticals in the studio – landscape design and origami. The practice of landscape design is very structured and formalized – we take up design of city-master plans, urban parks, streets and squares, country gardens, hillsides, riverfront developments, resorts and farmhouses. We have completed over 80 landscape projects all over India. The practice of Origami has grown very organically, as there was no precedent for a commercial/professional origami studio in the country before I made the foray».

How do you approach origami? What is your relationship whit this word?

«There are many very accomplished origami practitioners in India, but I am trying to take it beyond an individual skill or hobby and convert it into a fully-bloomed professional practices, encompassing the fields of art, architecture and design. For anything where there is no precedent, it is always learning by doing, and the process of formalizing and giving structure to the professional practice of Origami has been an evolving system. I love it that I am constantly moving into unknown territory, getting out of safe ways of doing things and trying risky ideas. Many times the ideas fail, and invariably the studio matures and gains in wisdom as a result of that. Now a lot of young architects who love Origami – because of its natural relationship with form, space, geometry and structure -, are joining my studio. I have given them the platform to transform a passion into a compensable and professional job. This gives me a lot of satisfaction. I also teach Origami-Architectonics at design and architecture schools and universities all over India and South-East Asia, to identify and groom the next generation of Origami lovers who will take this ahead in the future».

Regarding the paper, what kind of paper do you use for these works?

«I started folding in 2009 when I was studying for my Masters at the Bartlett, University College London. At that time, I would use scraps of paper which were discarded printed paper which had architectural drawings on them. Slowly, I taught myself to understand grain, texture, paper-weight (grammage), fibre, strength, age and porosity – all attributes of paper which affect the way paper is folded and how it holds the creases. Now, it has been 10 years since that beginning, and I have used over 300 types of paper from all over the world, branded and non-branded, of numerous different kinds of thickness and textures, even composite paper which are combinations of textiles and paper, metallic foil and paper, plastic and paper, hybrid papers like Tyvek and Mylar – which are not paper at all – something called stone paper – which has a thin veneer of stone on top of the paper – wood veneers paper and even elephant-shit paper. Hand-made papers have lots of challenges, but they are also very enjoyable to work with. Their unpredictability sometimes renders them magical, and at other times makes them total failures».

Do you have a particular technique, which one?

«Being an architect, I really enjoy abstract and repeating 3D tessellation patterns. It is so much fun to vary the creasing pattern, introduce quirks into its geometry or create transitions from one pattern to another. The joy always is to see two-dimensional paper become three-dimensional sculpture by the process of folding. When drawing or designing a pattern on a CAD software, as an architect there is intellectual happiness in visualizing how it will become a work of space, volume and sculpture. Architecture happens very slowly, but Origami happens much faster, so the happiness it gives to see a 2D drawing become 3D form is like an adrenaline rush for an architect».

How and who do you get inspired by, for your subjects?

«All kinds of folding exists in nature and the universe around us. Leaves and flowers have folds in them – as you can see in the image. Our bodies are made of millions of folds – from our eyelids to our brains, to our intestines, to the joints in our fingers and arms. The DNA from which we are made is all folded. Rivers, ocean coastlines and mountain systems are made by processes of folding and interaction between rocks, water, soil and wind. Sea shells have folds inside them, as do sound and light waves when they move through space. Even gravitational space-time is made up of folds. I am not saying this, Einstein said this a 100 years ago. My inspirations naturally then come from this treasure trove of folds all around us and even inside us. If I achieve even a fraction of the perfection – of the folding existing nature – in my work, it would be my humble tribute to Mother Nature».

What are the technical problems related to these works and how did you solve them?

«Origami has traditionally always been practiced in the miniature, such as table-top sizes and small scale hand-held forms and sculptures. When I seek to make this work of large architectural scale, there are architectural scale problems. Paper may not have the strength to hold shape at such scales, or may get torn. The structural stability is the paramount challenge. When I began, I used to make small scale models which were perfect at that scale, with immense complexity, and then I was naïve enough to think that I could just scale up the idea to the size of a hall or a factory by just increasing the thickness of the paper. Of course, there are lots of little structural tricks we employ, we use the geometry of the folds to strengthen the material by placing them strategically in the pattern drawing. We also use thread, rope, metal wires woven into the material and so on. When the work is 30 metres in size, just paper on its own is simply not strong enough. This is a reality one has to work with. Being an architect also helps to solve these product design problems».

Beautiful is the work presented in Lucca: how this project was born?

«I decided to enter the Lucca Biennale Residency competition in 2015 – for the 2016 edition –, and I was not selected. Then I decided to not give up and I again sent an entry in 2017 – for the 2018 edition. The theme given by the jury was Chaos and Silence and I made a work which was called the Sights and Sounds of the Cosmos. The work represents a set of Nebula clusters colliding into each other in space. That is billions of stars and planets colliding and smashing together. Can you imagine the sound of such a thing? Yet we hear nothing, space is silence. I sent a 300 millimetre x 300 millimetre maquette/study model to the selection jury and after many rounds of discussions and deliberations, they selected my work along with 6 other artists from all over the world. They asked very tough questions, like – “what is the guarantee the work will not fall down during a strong wind?” I had to convince them with technical details and solutions and that the work was viable at a scale of 12 metres and 8 metres. This was my largest work – outside India – for the first time».

Have you made other works with paper of this scale? Can you tell us about them?

«Recently my studio filled an entire ballroom measuring 16 metres into 12 metres with origami in Mumbai. It was a sea-facing location and the Origami ceiling referenced the coming and going of ocean waves at sunrise and sunset. It was a truly spectacular project, in a very tall space, technically very challenging and immensely satisfying when it was eventually installed successfully».

Projects or dreams in the future?

«I would like to fill the Turbine Hall at the Tate Modern in London with my Origami one day. Or the beautiful concrete spaces of the recently inaugurated Tate Vaults. And the plaza underneath the Eiffel Tower with my Origami hanging from the base arches of the Eiffel Tower itself. There is no harm in dreaming, is there? Sometimes the almighty finds a way to make true our dreams».