Set designer trainer and all round artist, Elena Borghi designs and creates paper worlds for the display windows of smart shops in Milan. Paper is part of her DNA, “it has always been”, “a poor material which can become rich through the hands of the person who works it and this is priceless in terms of fascination and uniqueness”. Already known to the Italian public, Elena Borghi is now ready to push herself beyond those borders.

Ironic and sharp, Elena Borghi is an interesting artist in the field of papercraft, a method of creating three-dimensional objects with paper, outwardly similar to the art of origami. In order to make these objects, models and tools such as scissors, cutters and glue, are needed. With these, Elena designs and creates set-ups for shop windows, exhibitions, events, interior designs, publicity, photographic shoots and any space “deprived of an etheric presence”. She designs on any surface on which her black lines can flow, but she retains a unique feeling for paper, as it is a “poor material which can become rich through the hands of the person who works it”.

Her customers mainly belong to the world of luxury fashion: names like Castor, Erica Cavallini, Sergio Rossi, Seventy, Serapian, Sicis Jewels, Trussardi, Vogue. And – even with them – she says: “a work is a success when the customer feels well-represented by a creative consultant who has remained consistent with their own sensitivity”.

She lives in Milan, but works and teaches throughout Italy, and is now more prepared than ever to make herself known worldwide.

Elena Borghi, how do you like to define yourself?

“Years of analyses and self-criticism, and this question still manages to shake me a little… but less than in the past! I think that Elena Borghi is a person who has succeeded in keeping alive the creative impulse of her inner child. I like to define myself as a craftswoman with a big heart”.

How and when did you start with paper?

“There has always been paper. Perhaps when I was a little foetus and my mother liked smelling the odour, literally burying her face into books. I think it is part of my DNA”.

Who were your instructors, teachers or even personalities who left in you an artistic imprint?

“My first and undisputed teacher was certainly “Nature”. From a very young age I spent hours watching the ordered dynamics of ants, the geometry of leaves, the logic of trees. Then, certainly, I was brought up with so many pictures and this continues even now, but without a specific relevance or adherence to a certain movement. I went from furniture catalogues to Kandinsky, from Klimt to Jacovitti. In practice everything which comes into my hands can be food for my creativity, so I don’t underestimate anything”.

What moved you forward along this pathway?

“A strong drive, that I would say was almost physiological, like eating, breathing and laughing. I wouldn’t therefore talk of bravura and certainly not talent, but simply a survival instinct. When passion overlaps with work, that’s how it is”.

Where did you study and what did you specialise in?

“When I was 15 years old I discovered that set design was the true answer to all the questions which had tormented me when I was little: “When I grow up, I want design to be my work!” I said. But then, inside myself, I knew that wouldn’t be enough, that I needed something else, to direct my creativity on a number of fronts. I went to the Liceo Artistico Statale [state art secondary school] in Treviso and then the Academy of Fine Arts in Brera, graduating in set design. Training in this way was fundamental, as was immediately doing everything possible to find work pertinent to set design. This allowed me to have a long and rich apprenticeship right from when I was very young. I went and knocked on all the doors which might have relevance to what I wanted to become”.

What is your work… and out of your work, what do you like doing best?

“My work is very varied and it is really good because, even in this sense, I have found an answer to my needs. There are those who like me as a set designer, others as an illustrator and others as a paper artist. I think it is essential to interpret a brand like an actor would a character: through one’s own ability express the potential of a client, possibly ahead of its time”. 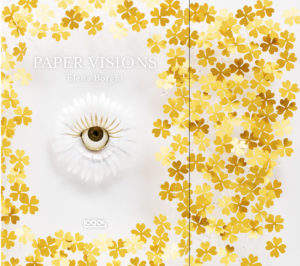 “Because it is a material which has always been part of my life; I find it easy to work with because I love it, I understand it, I listen to it. Because it is a poor material which can become rich through the hands of the person who works it and this is priceless in terms of fascination and uniqueness. And then because, perhaps, I have a brain and slightly “nerd” problems which make me suitable for it”.

Do you have a preference for type, weight or anything else?

“I don’t think so. Each paper becomes my great love from the moment I get involved in a design, even a simple piece of white cardboard. Certainly, each piece of work needs the right weight”.

What techniques do you use?

“I cut and assemble, so – if you will allow me – rather than speaking of techniques, I shall speak of pathology, seeing that many times it is a question of hundreds of tiny pieces. I can say that I don’t like using the origami technique because it makes me feel forced into rigid rules and patterns which make me uneasy. But I really appreciate the genius of people who practise origami”.

Do you use other materials in addition to paper? Which ones?

“Being a set designer trainer, I have become used to knowing and working with many materials so, depending on the work, I like to suggest what is most suitable. In the last few years, thanks also to the publishing of the monograph “Paper Visions” paper is the leading material, both for displays and for illustrations”.

Can you tell us about a recent piece of work which was particularly successful?

“Each piece of work can teach us something, so I try to pay attention to recognising everything that can be useful for both my professional and human development. I am pleased with collaborations which have just begun and which may lead to the creation of new things or receiving commissions to make videos in stop motion with paper. I am happy to be able to use illustration in the most varied fields: wallpaper (Elena is in fact one of the designers of LondonArt wallpaper, editor’s note), ceramics. A work is a success when the customer feels well-represented by a creative consultant who has remained consistent with their own sensitivity”.

From where do you get your inspiration, and what inspires you?

“From a young child I was always hungry for pictures, for visual stimuli, but not only that, also music, literature, cinema, design, architecture, exhibitions, are all things which I greedily devour, waiting for them to mix together and become something else, capable of emerging, strongly and unexpectedly, like the flight of a flock of starlings”.