Forest for future involves Europe to support Indonesian primary forests. The Association, which is a branch of the Indonesian Belantara Foundation NGO, promotes the conservation and promotion of primary forests to protect their biodiversity. A project where APP – Asia pulp & paper is in the front line, together with the Green Management Institute.

Forest for future (f3) http://forestforfuture.org/it/ is a non-profit making association promoting the conservation and promotion of primary forests and the protection of their biodiversity. Everything stems from a project in Indonesia, which was then extended to Europe. In the old continent, f3 is a branch of the Indonesian NGO named Belantara foundation http://belantara.or.id/, which manages the forest conservation and protection projects in Indonesia.

The first step towards the setting up of Forest for future was made in June 2016 in Italy with the signature of the Declaration of intent in Milan; the association was created and officially presented last autumn by the Green Green management institute, which promotes the initiative in Italy, together with APP – Asia pulp & paper.

From Indonesia to Europe

f3 is thus an association of individuals and companies, whose aim is to preserve the forests of Indonesia, which is a very significant area of the world from an environmental viewpoint, but at the same time a very vulnerable one. Indonesia is indeed one of the most important countries in terms of biodiversity, with a very large number of plant and animal species, and it is characterized by a massive phenomenon of exploitation of its natural resources. One of Indonesia’s biggest problems is deforestation , i.e. a phenomenon that, in the words of the president of Forest for future and the Green management institute Francesco Bertolini, «is today one of the most severe causes of climate change, as it accounts for 20% of global CO2 emissions, i.e. for a higher percentage than transports, which causes 13% of global emissions». 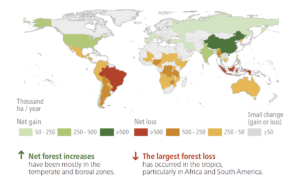 The Belantara foundation, on which the f3 association builds, was established in 2014. Its objectives are the zero desertification, identifying ten areas for the restoration and conservation of the environment, by reintroducing native plant and animal species, for a total of 10 million hectares land; the reduction and mitigation of the risk among the populations resident in the villages; and conservation (figure 3). «This project, which has a high environmental value, has helped generate the idea of generating a bridge between the activities of the Indonesian NGO and the European industry and stakeholders that led to the creation of f3, thereby working on exchange projects between different cultures».

Forest for future only serves as a catalyst with the aim of favouring the link between realities like the Belantara foundation and the Italian and European companies that care for the sustainability of their productive supply chains and are interested to develop sustainability projects. The decision to involve European companies in a project that concerns such a distant project of the world thus stems from the intention to enhance transparency and the knowledge of the origin of the materials used to produced the increasingly widespread packaging. Bertolini goes on and says that «the use of packaging is on the rise for a number of reasons – ease of use, the conservation of food, social developments that have led to an increasing use of disposable packaging, the added value provided by packaging to a number of products, aesthetics, and so on. The evolutions described above have thus been the basis for the idea to promote what has been done and is still being done in Indonesia. f3 is not a traditional association, yet it aims at involving major players who share the same logics and pursue the objective of enhancing circular economy. f3 is a real example of the circular economy, as it deals with a final product that originates from a seed and is then recovered and recycled, to then become an element capable of feeding the planet again. All of these factors are at the very basis of f3, i.e. Bringing the logics that led to the setting up of Belantara to the Italian and European markets».

The central role of the ecosystem and the values of circular economy have been stated again in the declaration of intent presented and signed in Milan in 2016. «From the seed to sustainable packaging», with the intention to inform final consumers, too, of the origin of packaging and raising their awareness on this. «The protocol promotes an increasingly circular economy in the paper and packaging supply chains, thereby being in line with the conservation of primary forests, the balance between conservation and sustainable management of forests, and a more widespread diffusion of packaging with lower environmental impact».

f3 has activated synergies and collaborations with players, which share these sustainability objectives, and this has already led to the first results. In Italy, for example, some companies are already starting identifying possible projects that they intend to develop in Indonesia. And this is just the beginning.

«With the f3 association, we intend to involve the largest number possible of Italian and European companies in the Belantara foundation in these areas and thus have the possibility to disseminate, promote and enable all interested parties to take part in the programme as they deem appropriate, simply to get information or with a more active participation», commented the Regional Director for Europe of Asia pulp & paper Danilo Benvenuti on the matter. 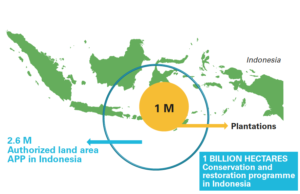 APP www.asiapulppaper.com firmly believes that the collaboration between several private players is fundamental to preserve the environment and has been carrying out its own sustainability policy for years. Benvenuti explains that «in June 2012 we have launched our Sustainability roadmap vision 2020, which illustrates the objectives of the group in terms of sustainability. In February 2013, i.e. two years in advance compared to what we had planned, we announced the entry into force with immediate effect of the forest conservation policy and the stop of all deforestation operations in the productive chain, thereby starting an ambitious programme for the safeguard of forests». This policy of the company is articulated into three main areas: zeroing deforestation, which is at the very basis also of the f3 initiative and implies the exclusive use of resources only from sustainably managed plantations; reducing CO2 emissions in the air; safeguarding local populations with social sustainability plans, and involving its own suppliers in all these activities. On the matter, Benvenuti says that «as one can easily imagine, a company like ours, which produces 19 million tons of product has a very large supply chain and it is therefore crucial that everything coming from its suppliers undergoes a new policy of supply chain control and management».

Among its various tasks, APP also provides support to the projects of the Belantara foundation. «In Indonesia we have 2.6 million hectares authorized lands, which include natural forests, villages, roads, infrastructures, paper mills, etc. Out of this area, 1.6 million hectares land are used for production, while 1 million is within the conservation and restoration programme implemented together with the foundation» (figure 4).

Benvenuti insists on the issue of responsibility. «The world of paper trade has considerably evolved and legislators today have new tools to intervene in this sector and guarantee the attention and correct use of resources, yet it is important that the private sector plays its role, too, especially when the private sector comprises companies like ours that work in areas of particular development and naturalistic interest, and they have not only an economic, but also and above all a social responsibility towards these areas. Our commitment is increasingly raise the bar and question ourselves, thereby always doing our best and providing stimulus that goes beyond the simple compliance with legal requirements».

The commitment of Italian paper mills

The Italian paper sector pays particular attention to the forest protection and conservation policies. One of the latest initiatives that saw the participation of Assocarta was the «Festa dell’Albero» (Festival of the trees), which took place at the end of November. This is one of the traditional events organized by Legambiente for the protection of green areas and the territory, which is supported by the Ministry for the environment and some Italian associations – FederlegnoArredo, Conlegno, AFI (Italian Forests Association), and Assocarta. The event promoted the planting of a number of symbolic species in protected areas and territories hit by forest fires in 2017.

«In a country like Italy, which traditionally lacks raw materials, forests and their biodiversity are assets to safeguard, protect and care for, which can become a source of income and generate new jobs», declared the president of Assocarta Girolamo Marchi, who highlighted that the Italian paper industry uses certified wood or wood coming from sustainably managed forests in Europe and outside Europe.

Established in 2014, the NGO owes its name to the Indonesian word “Belantara”, which means desert or uncontaminated forest. The foundation is the means that enables to achieve the objectives of restoration and conservation of the environment and endangered species in ten specific areas of provinces in the isles of Sumatra and Kalimantan in Indonesian Borneo. A territory of over 10 million hectares, which includes national parks, natural reserves and large forest parks. In particular, the foundation supports the restoration of the environment and the protection of endangered species, aims at managing the conflict between endangered species and local communities, develops methods to improve the conflict between endangered species and local communities, develops studies to improve and consolidate sustainability in the areas identified and supports local communities with financed projects to improve their living conditions.