Recycling pulper waste for the production of mixed plastic pallets: is the objective of the “Eco-Pulplast” project, financed by the LIFE 2014 programme, which has seen the creation of a prototype facility on an industrial scale for the moulding of pallets from mixed plastics obtained from pulper waste. An Italian project which opens up significant prospects of industrial development which will be able to contribute to the reuse of materials and reduction of the volumes of waste produced, with considerable environmental and economic benefits.

The topics of the circular economy and efficient use of resources are increasingly at the centre of European political strategies and public debates. Last 16 April the European Parliament approved the regulatory package on circular economy, which sets out ambitious objectives for the EU regarding recycling urban waste and packaging waste.

Faced with very positive numbers regarding the recycling rate, there still remains, however, great uncertainty in the management of process waste. Downstream from the paper recycling process there remain, in fact, 6-7% of materials which are not recyclable in the paper manufacturing process, and which constitute the “pulper waste”: classified as non-dangerous waste, and predominantly made up of mixed plastic, metals, wood, glass and sand, as well as waste fibre.

In this context, Lucense research organisation which has, for some time, been conducting studies designed to evaluate and validate innovative technologies to add value to waste materials from the paper industry – has launched the project Eco-Pulplast which aims to demonstrate the possibility of recycling pulper waste for the production of pallets made from mixed plastics, thus reducing the waste quota sent to landfill and to energy plants. Begun in September 2015 and financed by the European programme LIFE, this is an experimental project of complex and very ambitious technological development which is arousing great interest and visibility even outside the paper sector and which was presented last May to the 49th Aticelca Congress by Simone Giangrandi of Lucense. A project which strengthens the leading role of paper mills in the circular economy, allowing for further improvements in the efficiency of the use of materials and to consolidate the green image in the whole of the paper sector. 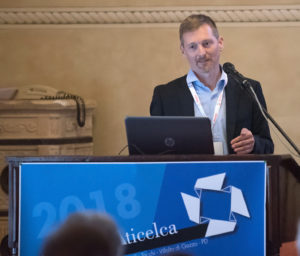 The paper industry has always been an integral part of the paper recycling system and has helped to achieve the excellent recycling rate of 80% of cellulose-based packaging recovered, ahead of time when compared with the objectives.

In Italy paper to be recycled represents about 57% of the fibrous raw material used by paper mills which, each minute, recycle 10 tons of paper, to make a total of 4.9 million tons each year, predominantly used for manufacturing paper and cardboard for packaging.

As well as Lucense  other partners of the initiative are Selene, leader of the project and company leader in Italy in the flexible plastic packaging sector, Serveco, the consortium of paper mills in the Distretto Cartario Lucchese [Lucca Paper District] (in Tuscany, Italy) which works on topics of environmental interest, and the association Zero Waste Europe, the European network of people who adhere to the principle of zero waste.

The culminating phase of the project, states Simone Giangrandi during the presentation, has been the design and creation of a prototype on a semi-industrial scale for the moulding of pallets in mixed plastic from pulper waste. Operative since June 2017, the prototype is formed of a shredder, a drying and densification sector, and the extruder and injection moulding unit. The moulding unit has innovative solutions designed specifically to work with mixed plastics based on polyolefins, with the presence of residual humidity and impurities. The line is completed by two pairs of moulds to create euro-pallets of 80×120 cm and CP7 pallets of 110×130 cm. And recently a “slide” has been added, which allows the machine press to be fed in parallel with two moulds, thus doubling the production capacity of the plant (figures 2).

Tests on the pallets

The results of experiments on the pallets have shown excellent resistance to compression and ease of handling. The reduced rigidity of the plastic compared with wood has, on the other hand, required interventions on the design of the moulds, by reinforcing the structural weak points, in particular for distribution of uneven loads (figure 4). 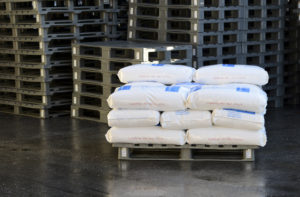 Particularly important will be the validation phase of the pallets under actual usage conditions, necessary to demonstrate the performance and overall length of the life cycle. In this regard, significant company groups have already become involved in the project:Versalis (an Eni group company) and its PRS pallet pooler, second largest European group in terms of the use of pallets produced in its own company logistical circuits, carried both by road and by rail; Unicoop Firenze, with which it is in the process of defining a test on a closed circuit of movement of tissue products from paper mills in the Lucca Paper District, thus contributing to the creation of a local circular economy and strengthening the territorial nature of the project.

Furthermore, in collaboration with the Bocconi di Milano University, the LCA (Life Cycle Assessment) analysis has been started up to assess the environmental impact of the whole life cycle of the new pallets and compare it with traditional pallets made from wood. The analysis, the results of which are expected at the end of the project, includes all the life cycle phases of the new product, from the supply of the raw materials up to the final disposal.

Cleanliness of the plastics: the technologies available

The project has highlighted the need to improve the level of cleanliness of the plastics in order to simplify reuse in the manufacture of items.

In this regard, over the last few years have been appearing, in the paper sector, suppliers of plant for separating waste materials previously used for other types of waste. Some paper mills have recently installed the first experimental plants and are working with suppliers to develop new technologies.

Lucense and Selene are, therefore, conducting research into the technologies available for separating materials, and holding meetings with the main suppliers and making visits to machinery and plant installed in paper mills or available at the suppliers themselves. This research is regarding both the technical operating characteristics of the plants and economic and management aspects, and has shown up two different types of separation technology: dry and in water.

Both technologies are open to the possibility of separating and sending for recycling, not only the plastic component, but also the fraction of fibre present in the pulper waste, to be reinserted in the paper manufacturing process.

– Identification of the best separation technologies and recycling of pulper waste materials (BAT).

– Trial in a paper mill of a pilot plant, with the development of the process of separation and sending for recycling of cellulose and mixed plastics for various types of pulpers.

– Drawing up of guidelines containing useful information and data for paper mills, so they can, internally, create personalised separation lines according to the characteristics of their own waste and manufacturing and product requirements.

The characterisation of the fraction of fibre is carried out in the wet laboratory of the CQC – Centro Qualità Carta [Paper Quality Centre] of Lucense accredited ACCREDIA ilac-MRA since 1994, through the following analyses:

– Somerville screening for the assessment of non cellulose impurities, flakes and stickies

– preparation of sheets from the fraction of fibre accepted, on which to measure the tensile index, paper stiffness, percentage of ash and optical lack of homogeneity

The quality of the recovered cellulose, made up predominantly of short fibre, is in line with that present in the pulper waste, with levels of cleanliness, ash and ends which can also vary significantly.

The analyses and industrial tests conducted up until now confirm the possibility of recovering and sending for recycling up to 90% of the fraction of fibre present in the pulper waste. The separation of the fibre allows the humidity of the other fractions to be reduced significantly using traditional systems of pressing, reducing, by up to 50%, the volumes of waste to be disposed of. Any transfer of the plastic fraction to recycling plants would bring further benefits to the paper mill.

A detailed 3 year business plan for the industrial development of the project has been created. This plan anticipates the creation, by Selene, of 3 complete production lines, with a production capacity of about 1,200,000 pallets/year, corresponding to 60-70,000 t/year of pulper waste.