Commissioned by BillerudKorsnäs AB, a major company which stands out on the international arena for the production of primary cellulose-based packaging, the IVL (Swedish Institute of Environmental Research) has conducted a comprehensive study, structured on the life cycle assessment and comparison of products for primary packaging, with the same type of characteristics and practicality but different composition. The lengthy work reveals better and significant environmental performance of paper solutions compared with corresponding plastic products.

The first research steps were taken in 2014, starting with the collection of production data, recorded during the preceding year, at the paper factories of Gruvön and Skärblacka (Sweden).

Inspected by Bureau Veritas, a multinational certification and inspection organisation, the close examination was carried out using the LCA methodology, which fully meets the high need which is gradually being shown by consumers, stakeholders and businesses, of a transparent and structured awareness of the environmental performance of market processes and goods.

Thanks to the innovative and extensive approach, life cycle assessment qualifies as a fundamental and very effective tool, as well as being scientifically appropriate, for the study and objective quantification of energy and environmental effects and, consequently, of potential impact, both direct and indirect, linked to a product or process during the entire life cycle («cradle-to-grave»), in other words from the supply of raw materials to disposal/treatment (figure 1, here under). 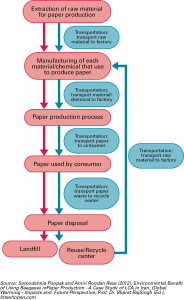 Under international regulations, the LCA procedure is standardised in ISO 14040:2006 (Principles and framework) and ISO 14044:2006 (Requirements and guidelines).

The opening stage, in tracing the underlying principle of the whole investigative course, introduces the functional unit or reference point for the analysis, compared with which the system flows are standardised, so as to guarantee, in addition, the comparability and comparison of the findings.

In the specific case, the functional unit is determined by the particular product created to perform a pre-assigned task: cement sack, pasta bag, grocery bag, bottle (table 1). We should start by saying, in this regard, that, by virtue of the nature and property of the material, the weight of a product in paper can differ from the plastic equivalent.

The system boundaries are drawn so that they include the production chain stages which go from extraction of the raw materials up to delivery of the finished product to the customer, excluding, in the basic configuration, the product EOL, end-of-life.

Within the study, two separate system expansions are carried out, with the boundary being redefined. In the first case, this enables the arrival destinations of products, once the end of their useful life has been reached, to be analysed (evaluating, furthermore, emissions avoided, produced by alternative energy sources) and, in the second case, it includes effects arising from the use of excess thermal energy produced by the Gruvön and Skärblacka paper mills, for district heating.

The aforementioned characterising parameters, which are generally referred to as KPIs (Key Performance Indicators), are supplied by the CML2001 (Centre of Environmental Science of Leiden University) and subsequently implemented in the GaBi v. 6.3 software.

Then we proceed with the more critical and demanding identification and quantification of flows across the system boundaries, with reference to the resources used (raw materials, water), energy consumption (thermal and electric), atmospheric emissions and emissions into bodies of water (table 3), arriving at the construction of an environmental balance, respecting the physical principles of mass and energy.

The data, site-specific, transmitted by BillerudKorsnäs AB, has a qualitative and quantitative basis, relating to raw materials (only virgin, excluding the use of recycled fibres), chemicals and fuel bought, net consumption of electricity, from both renewable and nuclear sources, release of contaminants in the air and water and waste generated. Where it was difficult to obtain the information, it was necessary to overcome the lack of numerical data or make approximations with secondary data, prior to 2013 or from other sources.

Data extracted from the collections of PE International (now Thinkstep) was used, for calculation purposes, in order to study the impact linked to transport, vehicular and maritime.

For this section, it should be pointed out that, in view of the possibility, often put into practice, for plastic products to be made more compact, compared with similar paper ones, the utilisation factor for the first is calculated in relation to the weight whilst, and for the second, in relation to the volume.

Accordingly, objects made in cellulose matrix take up a smaller volume compared to those in plastic (which, on the other hand, weigh less), having, however, a more significant impact on the environment.

The research process approaches its final step with the processing of the information, basically numeric by nature, obtained and/or weighted during previous stages. The explanatory chart (table 4) showing the environmental impact from the production of a tonne of Kraft paper, in the Gruvön and Skärblacka factories, respectively, bleached and unbleached, serves as an introduction to the presentation of the results which the LCA methodology has obtained in relation to the two categories of packaging mentioned.

Among the items which are shown in the table:

-Forestry refers to the emissions which develop during cultivation, management, use of the forests, aimed at sustainably produced wood;

-Energy (upstream) states the emissions generated in the production upstream of external energy flows (electricity and fuel) then used in the manufacturing process;

-Chemicals (upstream) indicates the emissions which originate from the manufacture ex situ of the synthetic compounds, subsequently added to the mixture for the preparation of Kraft paper;

-Transports (forest/chemicals/fuel) refers to the emissions arising from the transport, to the required factory, of all the goods and resources needed for the production chain.

-Manufacturing (emissions from mill) refers to the emissions produced during the various phases in the manufacture of the finished product;

-Waste describes the contribution of residues, generated during paper production, including releases into the atmosphere which occur during transport to the final management unit (waste management facility).

Altogether, for the Gruvön site, it is shown that the main impact, out of the four potential ones examined, is inevitably due to the emissions released from the manufacturing process, with the exception of GWP, on which the production, upstream, of chemicals, energy carriers and the supply of forestry resources has more effect. The contribution of waste, since it is, for the most part, inorganic material, is negligible.

With regard to the Skärblacka paper mill, there are similar observations.

Starting to read the results relating to industrial cement bags (figure 2), it immediately appears very evident how, for the polypropylene article, the material production phase has most effect, in weight, on the potential for global warming, acidification and the creation of photochemical O3. Alongside this, the transport of the cellulose bag has a great impact on these last two, because of the considerable distance, about 17,000 km, from the production site (Sweden) to the place where the packaging is made (Indonesia).

Conversely, in both cases, since there is a customer base which spreads out around the conversion centre, the results show no environmental impact from the transport of the packaging.

If the functional unit changes (figure 3) the first stage of the production chain continues to be considered as having a very high impact for all indicators, except for GWP and AP, if we only consider the paper packaging. In relation to this last, however, within the above-mentioned phase, it shows a predominant effect in the estimate of eutrophication potential, due to the emission of COD and NOx.

From the comparison of the two types of shopping bags (figure 4), focusing the attention on the effects on EP and POCP of both of transporting the material and on manufacturing and transporting the finished product, the margin found is very small, whilst production remains high for all KPIs, independently of the nature of the packaging. Because of the enormous quantities of COD and N2 present in the waste water, together with the gas emissions of nitrogen oxides, the manufacture of the paper article affects the eutrophication potential, to a much greater extent than a similar one in plastic, unlike what is shown by the POCP in respect of which the impact is nearly comparable.

Looking at the final processing with regard to containers for liquids (figure 5), the choice to use cellulose as a raw material, in place of PET, gives a considerably better environmental performance, from GWP to POCP, with minimum effects on all the classes of comparison, with the exception of the production of the material which, however, prevails over all the KPIs and includes emissions linked to the production of stoppers, laminate and rings in LDPE.

Broadening the consideration, asking what are the effects of disposal or treatment of packaging at the end of its active use, you can promote the identification of the critical elements or aspects to examine in greater depth or differently, with a view to pursuing continuous improvement of the system, true to the principles of sustainable progress.

The end of life management of a product is of primary importance in the context of environmental efficiency. Based on the information gathered through the Statistical Office of the European Union, PE International, sources of literature, it is possible to model a robust waste management scenario (figure 6), for an individual type of material and a specific country. The widening of the boundaries has enabled it to be observed that, in almost cases, favouring forms of recycling and recovery to transferring to landfill, creates significant benefits for the environment, with a drastic reduction in impact on all the key performance parameters examined, apart from GWP, a factor which, in any case, gives higher values for plastic articles rather than paper ones.

Referring to the second expansion of the boundary, it should be noted that the supply of a local district heating device with the excess energy from Swedish paper mills does not offer real and significant, albeit positive, implications with regard to reference potentials (figure 7), probably because it is linked, directly, to the actual energy requirement.