Paper becomes “precious” in a more ephemeral sense, but also more attractive, thanks to its use in the design field and, more particularly, in fashion design. A field in which the creation of decorative elements, first of all jewellery, finds one of the most innovative contemporary expressions, thanks also to the internationally famous artists who have known how to realise the aesthetic and functional potential of such an eclectic material.

Born in Pistoia and raised in Florence, Bianca Cappello is the author of the treasure chest book of 21 gioielli di carta [21 paper jewels]recently published by Skira and released around the world. An interactivebook which takes the reader back to games when they were a child, inviting them to open up and wear the 21 paper jewels expressly designed by 21 internationally famous designers and artists who have chosen paper as their own medium of expression.

Bianca Cappello speaks of herself as of a lucky person, because she was always “surrounded by Beauty and that gentle Nature skilfully tamed by human hand to shape the typical Tuscany landscape from the Renaissance up until today”. And now that she is 40 years old, she realises how important this closeness to Nature has been, and how much it has influenced her philosophy of life. We interviewed her, exclusively, for Paper Industry World.

Bianca Cappello, what has your training been?

After specialising in classical studies at the Santissima Annunziata State Boarding school within the Poggio Imperiale (once attended by Maria Josè whose spirit we always felt hovering over the very beautiful frescoed rooms of the building) I continued at the Faculty of Letters and Philosophy at Florence University (Italy) with the specific intention of dedicating myself to the History of Art, but suddenly I realised that apart from painters and artists, what interested me was the subject of their paintings, all those details which reveal the daily life and culture of a society. Attendance at the Jewellery and Minor Arts course then opened up a marvellous world to me which continued with the School specialising in the History of Art at Siena University and with a series of courses at the Milan Chamber of Commerce and with the Italian Gem Institute, along a path which, still today, I am passionate about, in the deep conviction that every object and particularly jewellery, speaks and tells a story and it is fascinating to manage to get into their language to decipher it and understand it.

How did you get into the world of jewellery and costume jewellery?

For me, a piece of jewellery is an object of particular interest because it is the most vibrant expression of the aesthetic codes of a population, representing in depth its ritual and social symbols. For me, the materials of a piece of jewellery have no value economically, but are valuable in so far as they can really tell of the expression, not only of the creator, but also of the context in which it was created. With this in mind, costume jewellery, usually so snubbed by the artistic critic, takes on an enormous value because, more than anything else, it is the material of dreams and messages of the social individual and it is done on a daily basis and democratically. As a Jewellery historian of this, everything and all of its aspects attract me: materials, techniques, practical and anthropological function, shape and design, expressive and artistic skills.

Are you yourself an artist? Your technical skills make me think so…

Thank you, in fact I am not creative, but perhaps that is why I admire and love to study whoever is. To be as good as possible, I have always pushed myself further than aesthetics and shape, towards an understanding of the technique and material. I love to talk and discuss with artisans, artists and designers because, alongside conceptuality and expressiveness, even the most excellent masterpieces result from technical skills and material experimentation.

And how did you get into the world of paper?

I got into the world of paper jewellery in 2007, during an exhibition market linked to fashion and experimental jewellery which I was asked to handle in Berlin during the city’s fashion week. Germany, like northern European countries, has been pursuing, since the 1960s, a path of experimenting with jewellery design and conceptuality, and paper is one of the expressive means used. Paper, in fact, more than any other material, is able to free jewellery from its “original sin”, that is from its symbolic vocation as a status symbol for social differentiation, and also because of the provenance, often dark and painful, of the precious materials which form it. Alongside this European experimentation, I discovered the poetry of Asian Art which traditionally loves and creates with paper, working on lightness and philosophy. All the peoples of the world use and create with paper and each one with its own methods and techniques. I was immediately inspired and I put my energies into trying to communicate this world also to Italy.

How did you get the idea for the “carta preziosa” [precious paper] book, half book and half jewellery?

It came about from the natural desire to talk about paper, including its so profoundly sustainable appearance. A path which began in 2009: it was probably also the right moment and in that year I looked after the Paper Jewellery exhibition in the Triennale in Milan, immediately following by Fashion in Paper, a project involving academies and universities throughout Italy around paper and supported for three years by the Province of Milan, by Comieco, consortium for recycling and cellulose-based packaging, and by many other organisations linked to paper and the recycling of paper and other materials. In spite of all these events and related publications (Il Gioiello di Carta /Paper Jewellery, Electa, 2009; Fashion in Paper, published by Forme Libere 2011; Fashion in Fiber Recovery, published by Terre di Mezzo 2012) I felt the need to say something else; there was still a story to tell and that is why, once I had understood how “virtuous” the process of paper recycling and sustainability of its manufacture had become, I thought of creating Carta Preziosa, il Design del Gioiello di Carta [Precious Paper, the Design of Paper Jewellery], published by Skira.

What is the objective of the book, and who is it aimed at in particular? Would you like to tell us how the designers were chosen?

Just like for Storia della Bigiotteria Italiana [History of Italian Costume Jewellery] (2016) and Il Gioiello nel Sistema Moda [Jewellery in the Fashion System] (2017), with Carta Preziosa il Design del Gioiello di Carta I wanted to write a book with in-depth scientific content which would speak of the culture of jewellery and also of sustainability, but in an entertaining way, open and clear, so that everyone, from experts to enthusiasts, could easily understand it and at the end, I hope, emerge fascinated and with something extra. That is why Carta Preziosa was designed not only to be informative, but indeed also as a treasure chest of paper jewellery.

What were the stages of the project?

Carta Preziosa il Design del Gioiello di Carta had many processing phases, of which most were creative and artisan, from the Cartiera Paudice paper, manufactured in a highly sustainable chain and the pulp coloured with 100% natural colours, to the cutting of the individual jewels, for which I thank the patience and dedication of Cartotecnica PrintFinishing. I am grateful to Comieco and the publishers, Skira, for having believed in the project and having supported me with a very high level of professional competence.

I would also like to invite everyone to watch the four magnificent mini videos that the film-maker, Johnny Carrano, ingeniously created in collaboration with the fashion journalist, Elisa Motterle, to show the soul of this paper jewellery and how to wear it outside any scheme or convention. The videos can be seen and are available as free downloads on the Carta Preziosa page on the Sikira website (www.skira.net/books/carta-preziosa). 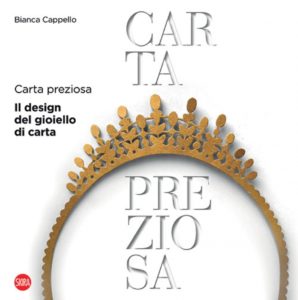 A great many, as always! There are so many beautiful and interesting things that jewellery can tell us that my only fear is not having enough time to communicate them all.

Who is Bianca Cappello

Jewellery Historian and critic of Contemporary Jewellery. After graduating with an Arts degree in the Artistic History of Jewellery at Florence, she specialised in Antique Jewellery at Siena University. In 2006 she was awarded a specialisation in Antique Silverware in Milan and in 2007 she collaborated with the Museo degli Argenti [Silver Museum] in Palazzo Pitti in Florence to create the new section of “Contemporary Jewellery”. Between 2008 and 2009 she looked after important exhibitions in Berlin and the Triennale Museum in Milan. Since 2010 she has been responsible for projects by AGC, Associazione Gioiello Contemporaneo [Association of Contemporary Jewellery] and since 2009 she has been a judge on the jury of the Bijou d’Autore competition in Rome. She is a lecturer for the History of Antique Jewellery at IED [European Institute of Design] in Milan and is a member of the Royal Society of Jewellery Historians.