Can a box raise emotions and lead to the purchase of a product? The answer is yes, especially if consumers’ perception is of a pack that is easy to recycle and with a low environmental impact, exactly as happens with paper and cardboard. This is the topic of the 6th Convention of the Comieco Paper and Cardboard Club, which was held last winter in Milan. The Convention focussed on neuromarketing, i.e. a new branch of applied psychology that analyses the impact of marketing and advertising on consumers’ minds.

The topic is fascinating. Everything that concerns our brain is fascinating, and today we definitely have better knowledge of the way in which we are made. The focus is on relatively recent research, says Vincenzo Russo, who is professor of consumer psychology and neuromarketing at the International University of Languages and Media Iulm in Milano and Scientific Director of the Research Centre on Neuromarketing Behaviour and Brain Lab IULM: only in the 1960s was it namely possible to identify the areas in the brain that are related to emotions and the areas related to other reactions. If one looks at the motivations that justifying the awarding of the latest Nobel prizes for Medicine, two reasons stand out: the discovery of a substance to treat or prevent a disease and brain functioning. And today modern technologies have made it possible to measure what is happening in the brain of consumers, for example when they react to ads. Communication and marketing experts have always had great difficulties in measuring the effectiveness of communication. At the end of 1800, the US politician John Wanamaker (1838 – 1922) stated that «Half of the investments in advertising are wasted: the problem is that I do not know what half it is». This means that we are forced to invest in publicity, but we do not know the effects.

In 1963 one of the biggest advertisers of last century, i.e. David Ogilvy, made a very perceptive statement, which according to Russo reads approximately as follows: the real problem of market research is that people do not think what they feel, do not say what they think and do not do what they say. «People do not think what they feel» means that there is a part of their brain that is activated unconsciously; «people do not say what they think» means that, if that part is unconscious, the individual cannot say what s/he thinks, and furthermore each individual tells her-/himself a little bit as s/he wants; «people do not do what they say» means that it is emotions, rather than rationality, that lead to purchase. Against this background one can easily understand the gap between the data collected and actual behaviour, but if emotions can be measured, then there are some more variables enabling to understand how to guide people’s behaviours.

Between rationality and emotions

A very interesting piece of data indicates that 80% of market products are bound to fail. Hence, there are products that have been harshly criticized and then unexpectedly sold very well, and other products that seemed to be perfect and yet were not successful. After years and decades in which studies based on the importance of rationality have prevailed, today we know that the most adequate model to understand purchasing behaviours (and the real essence of mankind) consists in acknowledging that emotions do not play a secondary role, but rather a decisive one. Thanks brain activity visualization techniques based on Functional Magnetic Resonance Imaging fMRI or electroencephalography (EEG), it is now possible to understand what really happens at a neurocognitive level in response to certain emotional stimuli, often provided with promotional or advertising aims, in order to determine the level of efficacy of the communication concerned.

According to Russo, studies on gastrophysics have shown how colours, shapes and sounds change taste perceptions or, rather, help perceive certain tastes and not others. A very strong correlation is, for example, known to exist between certain colours and tastes: white with salty, pink and red with sweet, green and yellow with sour, brown,black and violet with bitter. And it is known that, if we give a drink a more intense colour, the fragrance of that same drink will be perceived as more fruity. As with colours, one can equally play with labels: if a product is slightly salty and the indication «salty» is shown on the packaging, that product is likely to be perceived as more salty compared to an equally salty product, which, however, does not have the same writing on its label. Similarly, a chocolate mousse served on a white plate will be perceived as sweeter than the same mousse served on a black plate; or a cheese served with a knife is perceived as more salty than a cheese served with a dessert spoon. Finally, a bag of chips that is difficult to open is perceived to contain fresher chips than a bag that is easier to open.

The role of music and scent

Tests on the so-called «sounding» of a product are also very interesting: if a bitter chocolate is tasted when listening to music and a high frequency, that chocolate is perceived as sweeter than the same chocolate eaten by the same sample of tasters, while they are listening to low frequency music. This means that music can help modify sensory perception. The scent of vanilla and tort has also proven to raise people’s interest in buying. And if one sprays chocolate scent in a bookstore, people are more inclined to buy cookbooks.

But how are emotions measured?

The electro-encephalogram (EEG) is one of the tools that are most largely used by experts. It is necessary to measure the activation of a specific area of our brain that is, for example, associated with the sight of a spot.

The face reader, instead, is a piece of equipment used to record voluntary expressions, associated with pleasure, amazement or sadness, before a new object or product. Other tools include bracelets that measure the intensity of our emotional involvement (arousal) through heart rate and sweating. Respiratory rate is also measured when a complete analysis is needed. This information can be cross-matched with the data obtained from the eye tracker, i.e. a device recording the movements of our eyes, which enables to understand where the main focus of our attention is.

The decisive factors for choosing a product

According to Lockshin and Hall (2003), several factors can influence the choice of a product. These can be divided into internal factors, which are related to the product itself, its organoleptic characteristics, taste and area of production; and into external factors, which are not strictly related to the product, like packaging, labelling, price and brand.

As regards the external factors, packaging (including labelling) has taken on a crucial role in view of the following:

– labelling and packaging are the most important choice predictors after price;

– several consumers develop their own impression and idea on a product based on aesthetic considerations and the distinctive nature of packaging and label, with nice-looking and innovative packs are more likely to be chosen;

– packaging increases the likelihood that a product is seen and consequently also purchased or, at least, taken into consideration;

– besides influencing the consumer’s choice, packaging can also influence the perception and hedonic evaluation of the product quality before and after tasting;

Let’s move to application with the aim of analysing the role of paper and cardboard packaging as a driver of consumption and choice. The research study carried out aimed at investigating the role of paper and cardboard packs in influencing appreciation, perception of environmental sustainability, natural character of the product and positive perception induced by the pack in the perception of the brand. Neuromarketing was the methodology used. It was applied to a sample of 12 individuals, half of which men and half women. The tools used included an EEG helmet capable of measuring the implicit appreciation of a given packaging, an eye-tracker to detect the level of attention paid by a consumer to certain packs, an indicator measuring the level of emotion conveyed by the pack and a questionnaire to detect the most rational aspects linked to the thesis put forward. 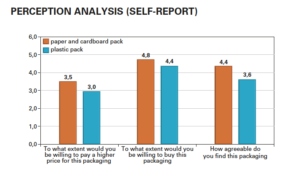 Between paper and plastics

–      «too much material for nothing, there is no logical connection with the product»

–      «the packaging is not very natural for being fruit packaging»

–      «the packaging is not appealing and hardly noticeable»

–      «the packaging is very anonymous and with too much plastic»

–      «bare, gloomy and nothing exceptional, it is hardly noticed»

–      «a lot of plastics and one cannot see the product inside, which remains opaque»

–      «it gives me a bad feeling, maybe I am impressed by the transparent paper»

–      «in spite of the guarantee that it is an organic product, it looks less appealing because of the plastic pack»

The following are the reasons why paper and cardboard packaging is appreciated:

–      «I like it because of its warm natural brown-earth colours»

–      «it reminds me of something that is less artificial»