Yankee hood and air system optimization are two further areas of interest for Enerquin Air, able to face them with a number of targeted strategies. The basic idea is that Yankee air systems are energy intensive and this is the reason why they should be routinely checked, aiming to ensure that they are running at an optimal level.

A proper hood balance can result in maximum thermal efficiency and one of Enerquin Air’s surveys can allow paper producers to verify the performance of their hoods, so to correctly balance, when needed, their air systems. Most of all, these controls can provide vendors with the opportunity to generate significant savings in burner fuel as well as in fan horsepower consumption, as the firm says. 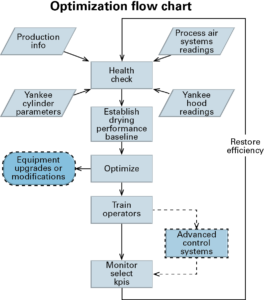 Jean Desharnais, Enerquin Air sales, marketing and applications director, whose speech at Tissue World was focused on the topics of has been working in the paper and tissue industry for more than 30 years, thus developing a sound expertise in aeration systems, with a special focus on drying efficiency and optimization. The goal was that to demonstrate that simply fine-tuning manufacturing processes end users can obtain remarkable reductions in terms of gas consumption. Desharnais began his overview by describing participants an ideal Optimization flow chart for tissue producers. An effective health check must in fact take into account the readings and the parameters collected from process air systems, Yankee hoods and cylinders, production information. The following step is represented by the establishment of a drying performance baseline. To design an optimization policy means to introduce the necessary modifications or upgrades on the equipment used and, subsequently, to properly train operators about how to monitor the relevant Key performance indexes (KPI) by utilizing the newest advanced control systems. Therefore the incognita that a facility manager must deal with refer to the room for improvement that a single plant displays, especially when, if compared to industry standards, the plant proves to be a real gas-guzzler, in Desharnais’s definition. A typical hood application requires 90-95% thermal energy and an amount of electrical energy in a 5-10% range, for operating at a 425-550 Celsius degrees. Given this figure, Enerquin Air’s Jean Desharnais described the very key-points of the group’s Yankee hood optimization roadmap. 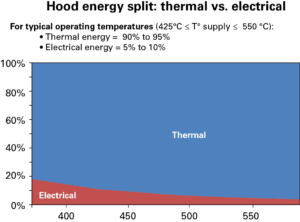 As easily predictable, the entire strategy starts with an in-depth review of the hood operation and with a complete performance test. The hood’s operating conditions are then evaluated carefully, especially with regard to the aspects of energy consumption and efficiency. The next step is to determine the drying rate for both the cylinder and the overall air system. Finally, operators are requested to carry out an inspection on the physical conditions of the system itself. To accomplish its mission, in Desharnais’s words, Enerquin Air ideally divides a typical tissue manufacturing facility in four different blocks and assigns each of them a series of individual Key performance indexes. In the success cases that the sales director introduced, Block 1 was addressed to PPR moisture management and its relevant KPI’s included the total drying rate of both the hood and the cylinder. At Block 2, where the cylinder contribution was analysed, the most critical KPI was represented by the cylinder drying rate, whereas measurements were conducted on the issues of condensate rise and heat losses. Block 3 includes wet and dry end hoods and the Yankee cylinder in order to verify the hood air balance, with measurements focused on the characteristics of air, in and out the hoods. Key performance indicators, in this case, were represented both by the aforementioned hood air balance and by the humidity of the hood itself. According to Desharnais, and to his company’s offer, an effective energy-saving policy should build upon the pillars of custom designed hoods and process air systems, enriched by a valuable portfolio of technical services. These elements can ensure manufacturer with an optimal wet end hood air balance (a 100% rate) and an optimal dry end hood air balance, at a 95% level. Block number 4, finally, includes the wet end and the dry end circulation fans, the wet end and dry end burners, C/B’s and VFB and measurements are carried out on the humidity rate, air flows and burner load. As for KPI’s, the ones to consider are the thermal efficiency hood, the burner air-gas ratio and the performance of fans, as sales, marketing and  applications director said. 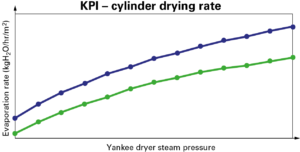 The road to optimization

Desharnais observed that the thermal efficiency values of a hood can translate into the thermal energy that the component itself requires in order to evaporate the amount of one kilogram of water. Modern systems can display a 3,840-5,100 kilojoule per kilogram of water (kJ/kg H2O) thermal efficiency, whereas the typical cylinder consumption amounts to 3,020-3,250 kJ/kg H2O. Further physical tests, in Enerquin Air’s experience, were deployed on the Yankee cylinder and on the clearance of the hood. This latter parameter should ideally swing between two and three centimetres, since should the clearance be too small, then higher are the risks of damaging the cylinder. On the contrary, if clearance is too small, the hood could eventually spill, resulting in a waste of heat. As for profiling dampers, Desharnais’s suggestion is that they should only be used temporarily with the aim to solve upstream issues, given that users must ensure that one damper, at least, is fully open. To reach the goal of improving a hood’s thermal efficiency, following the proposed on-site optimization roadmap, manufacturers must in first place maximize the cylinder drying capacity and then, as the second step of the process recommends, re-open the profiling dampers, when possible. Again, the exhaust flow must be reduced while the flow of make-up air must be adjusted, with a wet end air balance close to 100% and a 95% dry end air balance. The last step deals with the need to optimize the supply fan capacity and temperature parameters, as Desharnais stated. 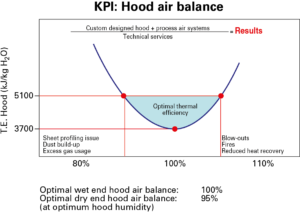 The results in figures

Thanks to the evidences collected in Enerquin Air’s previous studies Jean Desharnais was then able to show the actual results and benefits of a typical operation of optimization in a tissue manufacturing plant. For instance, wet end hood humidity improved climbing from 0.57 to 0.63 kg H2O/kg dry air (D.A.) and dry end hood humidity rocketed, from 0.36 to 0.54 kg H2O/kg D.A. The wet end hood air balance was 93% and reached the peak of 98% after the operation and the dry end hood air balance gained one percentage point (91 to 92%). After changes, the hood thermal efficiency index was 4,945 kJ/kg H2O (from 5,336 kJ/kg H20) and gas savings were as high as 0.6 gigajoule per hour (6%). This resulted in an approximate 2.8 dollars per gigajoule saving and therefore in an annual 14,400 dollars saving. Albeit obtaining less significant results in terms of wet end hood air balance, where no variation from the initial 86% threshold was recorded, a good optimization strategy, in Enerquin Air’s vision, can display much higher savings. In fact, wet end hood humidity can rise from 0.55 to 0.69 kg H2O/kg dry air and dry end hood humidity from 0.23 to 0.49 kg H2O/kg dry air, whereas the dry end hood air balance can reach an 105 percentage points level from the previous 86%. The hood’s thermal efficiency is reduced to 5,427 kJ/kg H2O and the burner heat load is down to 35.8 gigajoule per hour, compared to the previously recorded 41.5 GJ/h. Gas savings would amount to 5.7 GJ/h (14%) generating an approximate saving of 2.8 dollars per gigajoule, translating in a lesser expense of 129,600 dollars per year.

A Canadian company whose brand name contains and mixes the two crucial elements of energy and air, is a world renown manufacturer of drying equipment destined to the paper and tissue industry. Thanks to the expertise it achieved, and willing to act as a reliable partner for its worldwide clients, the firm aims to provide users with custom built industrial process air systems, related technical services and consultancy. Innovative technologies and support activities only represent a part of Enerquin Air’s overall business. In fact, the Montreal-based supplier is also focused on machine and facility audits, with more than 700 specific tests carried out all over the world, both in the paper machine hood and in the process air system technology segments. These audits are commonly developed in order to assess the precise improvement potential each machine or production line has and that could be turned into concrete and significant savings. To exploit this unexpressed potential means to increase profits and boost productivity, while at the same time gaining important results in terms of environmental compliance and sustainability. Therefore, Enerquin Air pointed out that the aforementioned analyses can also be followed by tailored performance improvement initiatives. And that, thanks to dedicated agreements, clients will always manage to receive process performance monitoring services from the producer’s technical teams.