Paper, an economical choice based on sustainability. Let us discover paper from a point of view other than the one of production, with the prospect of a paper industrial user that has one thing in common with paper mills, i.e. its commitment to use raw materials in a sustainable way and focus on their traceability: let us show you Ikea’s experience.

An internationally renowned industrial reality that is present on all major markets, Ikea has become the symbol of Sweden, where it solidly maintains its historic roots, worldwide. At the same time, it is strongly linked to a material that is an intrinsic and characteristic mark of the Swedish culture and, as such, has become part of its very identity as a company, i.e. wood.

«This material makes up the majority of our articles, i.e. today about 65% of Idea products today is composed of wood». These are the words of Andrea Perissinotto, who is in charge of the paper sourcing and development department of the company. On the occasion of the 2016 Aticelca Congress held in Milano Marittima, in the province of Ravenna (Italy), at the end of May he described the strategy and the efforts adopted by Ikea to ensure the traceability of its timber products and develop safer supply chains, with an effort to select suppliers from all over the world that guarantee compliance with international regulations. 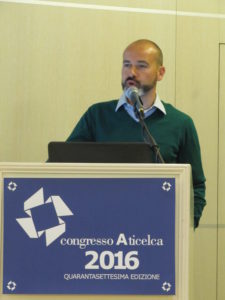 «Sustainability is a fundamental concept for Ikea and one of the pillars of its way of doing business, which finds expression also in the choice of its suppliers and the development of its materials» Andrea Perissinotto.

Timber products obviously include paper, as well. «Of the 19.3 million cubic metres roundwood equivalent (RWE) every year, the paper processed makes up for about 1 million tons, half of which is for packaging, i.e. about 45% of our catalogue, while the rest is paper built in our products», explains Mr Perissinotto. «For example, our decorative melamine paper unit registers an annual paper consumption of about 30 thousand tons and a similar quantity, i.e. between 27 and 28 thousand tons, concerns honeycombing. This is a very interesting area that is becoming increasingly important also for our strategy of new combined products, which are made up of chipboard panels and honeycombing cardboards, which are then covered by fibreboards».

The timber products bought by Ikea mainly come from Europe, precisely 74% of them. Of this percentage, 25% comes from Poland alone, with Poland being Ikea’s main supplier; additional 15% of the timber is purchased in Asia and Russia and 11% in other countries worldwide. The timber is then used for three main purposes: 49% ends up in chipboard panels, 38% is hardwood, while 13% is made up of paper. «Paper is used in many products and articles and in various forms, ranging from decorative papers to papers used for furniture covering, from the above mentioned catalogue to product packaging and the corrugated cardboard used for our boxes, up to the paper built in the various articles and tissue paper».

The strategy of sustainability

The purchase and use of timber raw materials, as well as the selection of the suppliers of these products, have to be based on the concept of sustainability, which is one of the pillars of Ikea’s way of doing business and has a twofold component of product compliance and development. «To this end, we adopted a long-term corporate strategy with objectives set for 2020 and drew up a public document entitled People & planet positive, which outlines its main traits». This strategy is centred around three elements: the articles, for which the perception given to the market that each Ikea product is designed and developed respecting the concept of sustainability; raw materials, both as regards resources, thus including also paper, and the energy used, which must be sustainable; and the issue of promoting the surrounding world, which involves social aspects and thus good neighbourhood policies and the relation with suppliers. Suppliers are expected to comply with a code of conduct, which has been in force since 2000 and foresees the respect for the environment, workers and their well-being in broadest terms. Paper couldn’t but be an integral part of this strategy. Evidence of this approach is the fact that the paper products bought by the Swedish group must comply with the international laws and regulations in force. By 2020 100% of all timber, paper and cardboard resources are expected to come from renewable sources. To this end, «35 million hectares of forests have received the certification of the Forest Stewardship Council (FSC) also thanks to our collaborations and wish to contribute to the FSC certification of additional 15 million hectares».

The value of secondary materials

The concept of resource sustainability also includes the reuse of all the materials, which can be turned from waste into secondary materials. The paper used by Ikea is of two main types, i.e. FSC certified paper and recycled paper. The various production plants of the group have been estimated to produce 150 thousand tons of corrugated cardboard waste every year. Thanks to recycling, this waste could make up for 55% of the group’s needs, without resorting to other resources. Mr Perissinotto concludes and says that «various opportunities are currently being examined to reach these objectives: playing an active role within the supply chain and collaborating with our suppliers, owning a part of some supply chains, establishing collaborations with major paper groups and implementing a circular economy, that Ikea strongly believes in». Complying with the sustainability parameters ultimately means meeting the demands of our own reference market and choosing suppliers that are in line with their own vision, but it also implies a precise commitment that will eventually become a major factor contributing to the reputation of our own brand on the market.